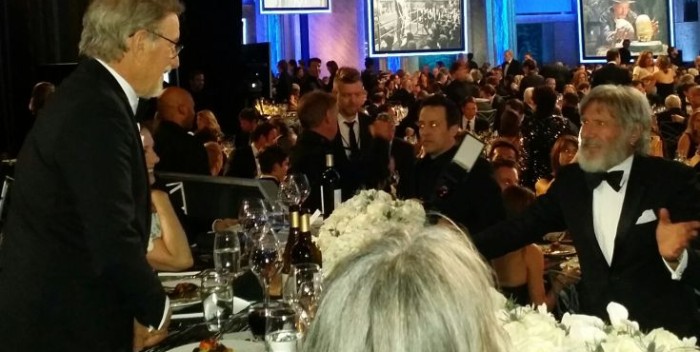 The annual American Film Institute Lifetime Achievement Award is in progress right now at the Dolby Theatre in Hollywood. Bob Gazzale and Sir Howard Stringer have already opened the proceedings, and Will Ferrell is pretending to conduct the orchestra playing honoree John Williams’ scores.

All of Williams’ friends are here including the two directors with whom he’s had the longest relationships– George Lucas and Steven Spielberg. Harrison Ford and Tom Hanks are front and center. Kobe Bryant turns out to be a close Williams pal. Other notables in the Dolby include Netflix’s Ted Sarandos, Disney-Lucas Films’ great leader Kathleen Kennedy, Drew Barrymore, legendary actor Peter Fonda, famed songwriters Diane Warren and Carole Bayer Sager (the latter with former Warner Bros chief husband Bob Daly).

The biggest news: Lucas tells me “I have retired from making films.” He’s putting all his energy into building The Lucas Museum of Narrative Art in Chicago with wife Mellody Hobson. “We’ve been working on it for six years.” Lucas has made great films apart from “Star Wars”– “American Graffiti” is an American classic. His place in movie history is secure.

Harrison Ford is sporting a bushy white beard. Has he gone Letterman on us? Or is Han Solo getting all Santa like in Episode 8? We’ll see…