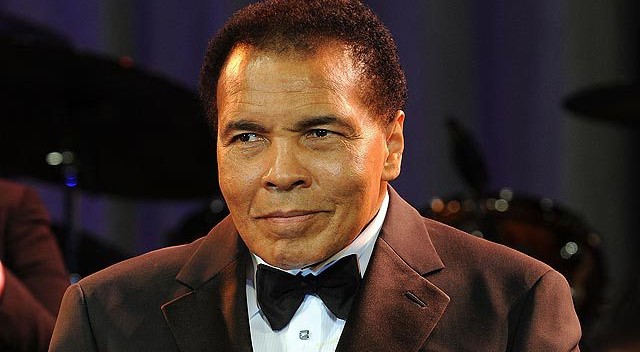 I wrote this back on March 22, 2010– a report from the annual celebrity Fight Night that raised millions over the years for Parkinson’s Disease research. It was all done in the name of Muhammad Ali, who appeared at the yearly dinners less and less as time went by, waved to the audience, and little by little was unable to speak.

Here’s my report from 2010. The following year, 2011, Champ skipped the Friday night dinner and only saw a handful of notables at the big dinner.

I always liked Reba McEntire, but get this: on Saturday night in Phoenix, at the Muhammad Ali Celebrity Fight Night concert and dinner, three bidders spent a total of $900,000 to have dinner with her.

The winners were Bill Austin, of the Starkey Hearing Foundation; Bob Parsons, of GoDaddy; and self made philanthropist Walter Scott, one of Warren Buffet’s childhood buddies.

Each spent $300,000 to have a meal with Reba, and presumably, her husband and manager Narvell Blackstock. Each of these men actually went to spent hundreds of thousands more during a live auction that raised, all told, over $5 million for research into Parkinson’s Disease.

There were plenty more exciting bids, including $70,000 to hear R&B legend Sam Moore sing his most famous hit, “Soul Man,” with Randy Jackson playing bass, and comedian Chris Tucker singing and goofing along.

Let me tell you: Chris Tucker does a very exact imitation of Michael Jackson doing “Billie Jean.” I am told he is very keen on playing an R&B great like Jackie Wilson or Otis Redding on the big screen. From the looks of it, he could do it. Brett Ratner, where are you?

Record producer and songwriter David Foster emceed the evening, the second in a row over the weekend, with more performances by Kris Kristofferson, Jessi Colter, Reba, comedienne Melissa Peterman, the Canadian Tenors, and a special appearance by Eagles front man Glenn Frey. The afterparty music was supplied by John Corbett and his band, with his beau, Bo Derek, dancing along. In the all star band: music greats Nathan East and Greg Phillinganes.

Others in the audience included baseball great Dave Winfield and stars like Arizona Cardinals wide receiver Larry Fitzgerald and women’s basketball great Nancy Lieberman. During the day on Saturday, by the way, the latter two had a one on one at a local basketball court. What was the score? “No score,” Larry said. “We were just having fun.”

Best quote of the night, from Glenn Frey, who told the audience: “Back in 1970, Don Henley, Jackson Browne, J.D. Souther and I hit on every waitress at the Troubador. But they were only interested in one guy: Kris Kristofferson.”

As for Muhammad Ali: his Parkinson’s is severe. He can walk, with assistance, but tires easily. He does not speak very much at all, and remained silent throughout the presentation given by wife Lonnie. He is mostly attended to by Lonnie’s sister, who is his trusted caregiver. However, say friends: “His mind is all there.” Ali simply suffers from waging a war against Parkinson’s. But his Foundation is now world famous, and a cure gets closer and closer.