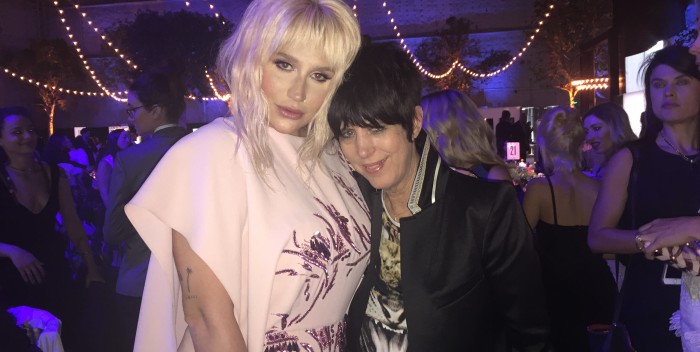 Kesha, the pop star who’s become a standard bearer after a highly publicized case against her producer Dr. Luke, stole the show Saturday night in Hollywood at the annual Humane Society gala. She wowed the crowd with a gut wrenching version of Diane Warren and Lady Gaga’s Oscar nominated anti-rape anthem “Til it Happens to You.” Warren — who was being honored as Humanitarian of the Year– accompanied her on the piano.

Kesha’s rawness and ferocity reflected her ongoing struggle with producer Dr. Luke and Sony, whom she sued for sexual assault in 2014.  “I want to dedicate this song to every man, woman, child and animal that has ever been abused, “ Kesha said before she sang the song,  as animal collages were shown.

The star-studded room was entranced and gave her a 5-minute standing ovation.  Kesha later told me, “Look I’m still standing.  I want to be an inspiration for women to come forward.  I want to make sure the legislation is changed. I want to talk about this with lawmakers.  And I want animals to be treated humanely in all areas.”

Diane told me:  “When it comes to being a people person, I prefer animals. I just love that so many of my artists are here.  Steven Tyler, (who sang one of his most successful songs in his storied career that Diane penned,  “I Don’t Want To Miss A Thing,)”  Jhene Aiki, Zendaya, Leona Lewis, I’m working with all of them.   I wrote an amazing song for Michelle Obama, “This is For My Girls.“ I’m going to Washington next week for a lunch Michelle is doing.  I really respect her, I want to talk to her about running for President and animals of course.”

Killed it @KeshaRose. I could feel your pain. Girl these boys won’t be in charge forever. The wisdom of women is rising. Let’s get louder

Moby was the host and noted, “ I’m a vegan.  I love animals generally more than people.  Animals don’t start wars or vote Republican. “  Of the CEO”s that run the horrible factory farms Moby commented,” there’s a special place in hell for them.  Right below pedophiles and Donald Trump.”

Moby also added “Diane is just fucking great,” and Wayne Pacelle, the respected President and CEO of HSUS, agreed..  He said  of Diane.  “Diane is one of the great talents in the United States, and we’re so glad to honor her for her incredible compassion for all animals. “  To have someone with that kind of talent associated with animal protection just adds real sizzle to everything we do. “ Wayne, who has a best selling book currently out “The Humane Economy,” and HSUS do terrific work.

Celebs that agree and were there were Priscilla Presley with her granddaughter Riley Keough, Ian Somerhalder and Nikki Reed, Frances Fisher, Songwriter/Producer Bruce Roberts, filmmaker Amy Ziering, Kathy Freston, Carol Leifer, actress Kate Mara who passionately spoke about implementing “meatless Mondays,’ and more.  All in all, a meaningful night for our precious animal friends.