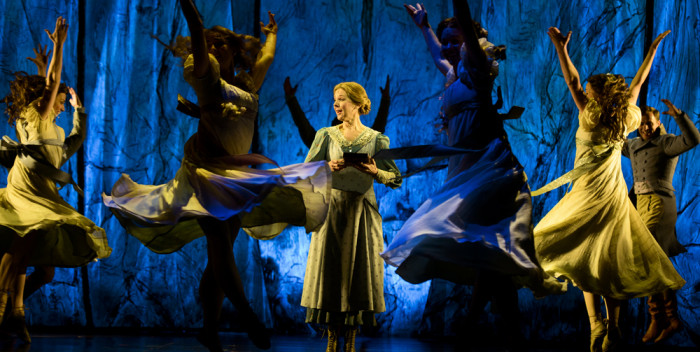 You know, I’m pretty fair to most Broadway musicals. I wasn’t wild about either “American Psycho” or “Waitress,” but there were excellent things about each that mitigated the problems. Let them live, not everything can be “Hamilton.”

But in a season of “Hamilton,” to see an effort full of cliches, riffs on other shows, ham-fisted treacle– come on, there’s only so much I can take. “Tuck Everlasting” is not very good, it’s just inches from terrible.

The only things that separate it from total disaster are some of the cast. Carole Carmello and Fred Applegate are stars, and they shine even when the material is working against them. Terrence Mann is the A Rod of Broadway musicals.

They barely survive this show. Mann, in particular, seems to have been recycled in scenes from “Pippin” and “Into the Woods.” (Was he also in “Seussical”?) I couldn’t tell sometimes if director Casey Nicholaw, who made “Something Rotten” a fresh show and a send up simultaneously, was trying for some kind of satire.

But I think he’s serious with “Tuck,” based on a novel and two movies about wood nymphs who discover magic water that lets them live forever. This is both a blessing and curse, as they have witnessed a century of friends and family coming and going.

The show felt like a century, what with tired, retreaded songs (some of the worst I’ve ever heard, my least favorite since “The Bridges of Madison County” and “If/Then.”) They’re uninspired, corny, and tuneless.

Some of the performers were wooden than the woods they traipsed around in). (Good sets, I will concede.) I won’t name names. But maybe there are so many shows running that producers can’t find really good singers. I was shocked by the range here from wonderful (Carmello, Michael Park, and newcomer Sarah Charles Lewis) to the other extreme. The actor who plays Tuck– Andrew Keenan Bolger– may be playing Tobias from “Sweeney Todd.” (He’d be very good in that role.) He looks like he’s about to burst into “Not While I’m Around.”

The plot doesn’t help. The non-aging family sets its sights on Lewis’s Winnie, who is 11. (And 11 in real life, too.) You’ve got Tuck, 17 on stage (but 30 in real life, 103 in nymph years) lusting after her. Very very creepy. Michael Park’s Angus also seems inappropriately matched to her. (He’s around 45.)

When Winnie goes missing, her stern recently widowed mother (who looks way too old to have an 11 year old) and her caricature of a nutty grandmother send a detective (Fred Applegate, who steals the show) and his bumbling son to find her. Cliches smack into each other from every direction. It doesn’t help that the choreography looks like summer stock.

Nicholaw’s edgy and sophisticated work is just thrown out the window. Maybe this is the season of homespun, corny, hackneyed material. (God help us.) But these shows cost $150 and up for tickets. You can’t compare this to something like “Hamilton,” work of genius. It’s like three giant steps backward.

Who was there? Ron Howard. Don’t know why. Alfred Molina, with girlfriend Jennifer Lee (“Frozen” the movie and the forthcoming musical). Michael Urie. WABC Radio host Joan Hamburg. The producers didn’t want press at their after party at Tavern on the Green, and I don’t blame them.

Tonight’s New York Times review is by Charles Isherwood, who’s been handing out positive reviews to shows that Ben Brantley would murder if he had the chance. I don’t know what’s going on– is it an advertiser thing? But his review tonight worries me.

One last thought: why can’t Carolee Carmello have a great show, and win a Tony? She’s too good for this stuff.