EXCLUSIVE The untitled Warren Beatty movie gets its first public screening mext Tuesday in Pasadena. A spy sent along some of the info including an actual description of the film.

Fox will release this film later this year, starring Lily Collins, Alden Ehrenreich, and Beatty with a big supporting cast. As I wrote this week, Beatty doesn’t want to go to film festivals, so this may be how they test the film in advance. I have a good feeling about this one. Fingers crossed. Any members of the test audience can email me, confidentially, at showbiz411@gmail.com.

PS As I’ve said before, also, Beatty may have chosen very wisely in Ehrenreich as his leading man. He already acquitted himself well in the Coen Brothers movie, and he’s up for playing young Indiana Jones. 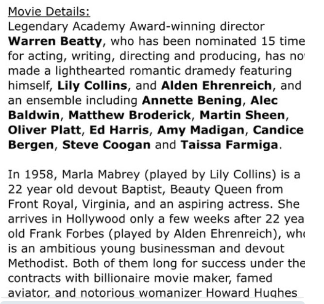