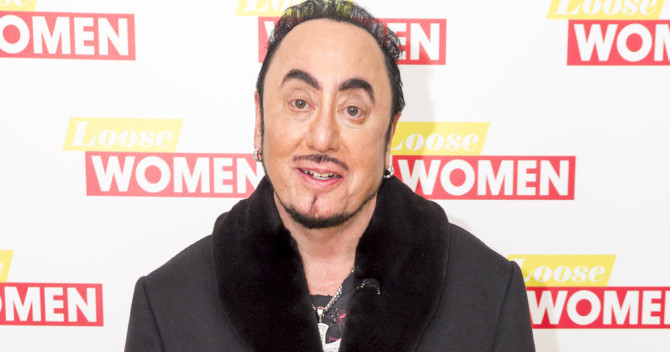 A shady character who was infamous for staging big music shows, David Gest has died at age 62. He was infamous for being Michael Jackson’s best friend in the 90s, and for marrying– albeit briefly– Liza Minnelli. He was also infamous for having a shrine to Shirley Temple in his bedroom.

Gest was a very strange guy. In the music business, he’d been publicist for Hi Records in Memphis where he represented singers Al Green and Ann Peebles.

I used to write about David Gest because he ran a phony foundation called the American Cinema Awards. He often listed dead people as officers of the foundation and took their salaries.

Gest, according to reports from London, was found dead this morning in London at the Four Seasons hotel in Canary Wharf. He was going to start a music tour this summer called “David Gest is Not Dead.”

What a character! Many older entertainers will swear by him because he always got them gigs. Condolences to them. Gest always peppered his parties with really old time actors from Hollywood. I still remember sitting with Liz Smith and Dominick Dunne at Gest’s ill fated wedding to Liza. Dominick kept getting up and going over to the other side of the room to see who was there. He’d come back and say things like “Ann Blythe is still alive!”

Gest did succeed at putting on Michael Jackson’s famous anniversary shows in September 2001 at Madison Square Garden; that was his crowning achievement. It was there that he really met Liza, who didn’t seem understand that Gest was gay. Their year long marriage in 2002-2003 was quite a scandal and ended with lawsuits and domestic violence.

The word is out: Liza Minnelli and David Gest are over. After a year and four months. Give or take. Some might say the marriage had no foundation. But Gest also has no foundation now.

For years Gest ran something called the American Cinema Foundation. It wasn’t clear what it did, but for a long time Gest collected a tax-free fee from the charity in the neighborhood of $150,000. He also listed quite sincerely dead former studio head Leo Jaffe as its president.

When this column and thesmokinggun.com caught Gest in these actions, he eventually let Jaffe go. But the foundation itself remained. Now, according to its latest tax return, American Cinema Foundation has ceased operations.

According to its federal tax filing, ACF finished the 2002 fiscal year with $429 in revenues. But it also had a $31,319 deficit. Gest for some reason gave $7,500 to New York University, which is sort of like giving sand to the Arabs or water to aquariums. Well, you pick the metaphor. NYU is so rich they’ve swallowed Greenwich Village whole. They don’t need David Gest’s tax-free money.

Earlier this year Gest announced that he was working with longtime pal Michael Jackson on a documentary about the singer’s life. But that never happened. Additionally, Gest took over management of Minnelli’s career, which resulted in more weird publicity than revenues. Her concert album on J Records was a rare dud for the label.

What will Gest do now that Minnelli has evidently figured a bunch of things out? One can only imagine. He still has his rumored collection of Shirley Temple memorabilia. Maybe he can sell that for income. But I do think his Jacko-Liza connection has been broken for good. Jackson’s new handlers certainly won’t let him muscle back into any of the singer’s business. And it’s likely that Minnelli’s friends will encourage her to find a new manager herself.

The big question now is the pre-nup. Oh, Liza, let’s hope you made him sign one!