The amFARians partied hard last night in New York. They are one charity that loves a good celebrity get together with paparazzi, designer dresses, and no expense spared.

But in 2014 and the two years preceding, amFAR — the famous celebrity-based organization tasked with raising money to find a cure for HIV/AIDS– made a pretty rotten investment. According to amFAR’s Form 990 filings for 2012, 2013, and 2014 they gave just under $1.5 million to a research company called the Vaccine and Gene Therapy Institute of Florida, located in Port St. Lucie.

What isn’t generally known is that the Vaccine and Gene Therapy Institute of Florida was shut down in fall 2015 under a cloud of financial woes including debts to the city and state totaling around $130 million. It’s an ongoing scandal in the Florida city of Port St. Lucie.

Most of the amFAR donations were made in 2014. But almost simultaneous to VGTI’s very public collapse, amFAR was singing its praises.

It doesn’t seem possible amFAR didn’t know the company was collapsing as they were pouring money into it.

But VGTI is gone now. So, too, presumably is amFAR’s money. All that’s left is a huge empty modern building built with tax payer money, and headline after headline about the scandal in the Port St. Lucie local newspaper.

The ongoing battles over VGTI include this nugget: when the company finally went bankrupt it was reported locally that 16 boxes of their papers had been found dumped in a trash bin at a Publix supermarket.

In 2014, their revenue increased by about $20 million from 2013. So their grants should have increased, too, right? They did, by just $2 million, or one-tenth of the dough that came in from all those crazy live auctions of trips to St. Barths and dinner dates with Sharon Stone.

In 2014, amFAR paid out $9.9 million in grants to organizations fighting AIDS. And they paid $9.6 million in salaries. 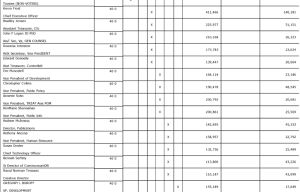