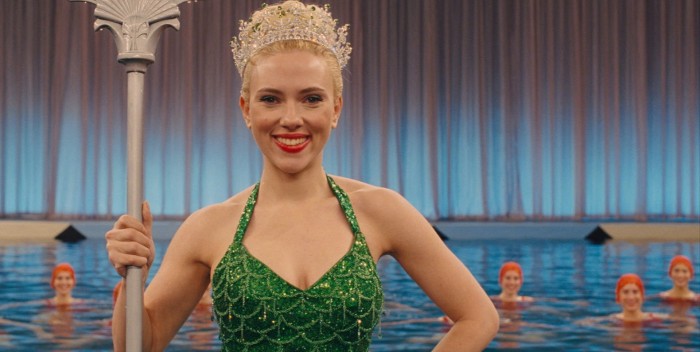 There was no official star studded premiere in New York for Joel and Ethan Coen’s “Hail, Caesar!”

But the “all media” screening on Tuesday night yielded quite a powerful foursome in the row. This jury of the Coens’ peers included Brian DePalma, Wes Anderson, Noah Baumbach, and Jake Paltrow sitting together. They went mostly unnoticed, but it’s hard to miss Wes’s hair. And Brian DePalma is not someone you see everyday at a press screening.

Reviews will be divided on “Hail, Caesar!” We’re going to hear tomorrow from our Leah Sydney about the more official premiere in Los Angeles on Monday night, which was unaccompanied by a party. Universal has not sent out positive signals on this one.

But I have to tell you that Coens fans, and fans of movies about old Hollywood, are going to love this movie. The screenplay is very funny. And the performances are excellent. Josh Brolin is outstanding as Mannix, the head of the movie studio. George Clooney is very funny as the movie star who’s been kidnapped off the set. There is a very deft performance from Scarlett Johansson and Ralph Fiennes, among others. Tilda Swinton plays twin gossip columnists, and she is sublime.

Indeed, there are several movies within movies and some eye popping set pieces, such as an Esther Williams-type water ballet and a spectacular musical sequence with Channing Tatum.

Most interesting was Alden Ehrenreich, who kind of steals the film as a movie cowboy-rodeo rider who’s being promoted to leading man status. Ehrenreich is the star of Warren Beatty’s untitled, and still unscheduled Howard Hughes movie. “Hail, Caesar!” shows that Beatty has a good eye for new talent. Now I’m really curious to see what Ehrenreich did for Beatty– considering he shot Beatty’s movie first.

Before a pile on is possible for “Hail, Caesar!” I really caution everyone to let it be digested. The Coens have never been well-subjected to snap judgements.