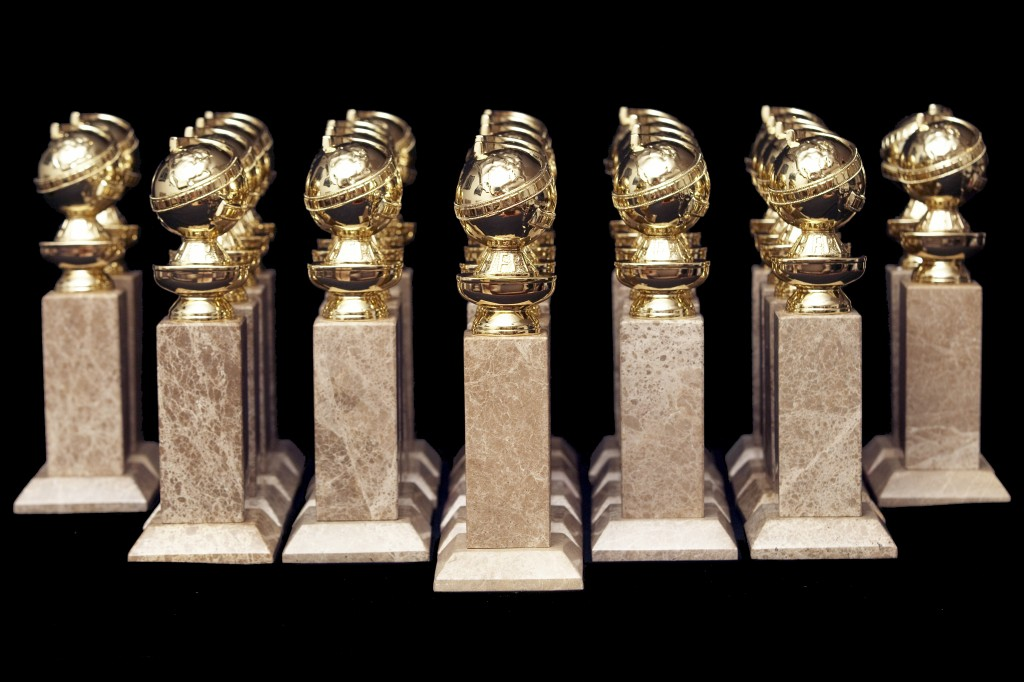 So what’s it like inside the main ballroom at the Beverly Hills Hotel during the Golden Globes show? It’s quite different from other events I go to there, like Clive Davis’s annual pre-Grammy dinner and concert. In a word: madness.

What the TV audience doesn’t hear is the constant cursing on stage. F bombs are dropped like leaves in an autumn storm. Sometimes I think it’s just to see if shock can be registered.

Food and drink are a problem. By the time the stars walk the red carpet, the food is off the tables. I have no idea what was served on Sunday night. When I arrived at my seat, there was a box of Lindt chocolates and a glass of water. Everyone is drinking from individual Champagne splits with a straw.

Food? There’s a back bar, way out of sight, that supposedly has a buffet for those who missed the dinner. But when I arrived there, a little crudite and cheese were left. Mythical sandwiches were long gone. The bar was jammed. I spotted Sylvester Stallone walking along with a couple of friends, before his category came up.

Stallone actually did not think he would win, even though he was assured so by just about everyone. “You probably shouldn’t drink before your speech,” I said to him. “It’s too late for that!” he called back as they passed me. This may account for why he forgot to thank “Creed” director Ryan Coogler in his acceptance speech, and had to go back for an addendum that did not make the air.

The longer the show goes on, the drinking among the 800 guests intensifies. The room becomes loud and boisterous. More and more people are standing, and not remembering a live TV show is being broadcast internationally. Several times last night host Ricky Gervais and others on the stage begged the guests to shut up already and sit down. No one listens.

Among the many people I met for the first time and really enjoyed were Charlie Puth and Wiz Khalifa. Their song, “See You Again,” from “Fast and Furious 7,” was supposed to win Best Song. It’s a beautiful, catchy song and it was a big chart and radio hit. The fact that is lost to the milquetoast Sam Smith record “Writing’s on the Wall”– a flop here in the US, from the James Bond movie “Spectre”– was insulting. FRom TV, by the way, I thought Puth would be short. He’s quite tall, and a lot of fun. He’s shaping up as a contemporary Billy Joel. Wiz Khalifa is just great. His real name is Cameron, and he said I could call him “Cam.” 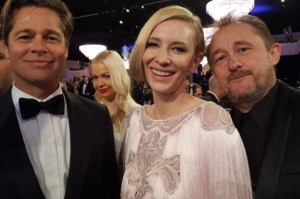 The best part of the night is right after the show ends. That’s when guests are leaving and, in the process, colliding with other actors, etc who they didn’t see or talk to earlier in the evening. I got caught in two scrums, so to speak: one that included Mark Ruffalo, Michael Keaton, a few Spotlight people, Matt Damon and his wife Lucy; and Jerry Hall, Mick Jagger’s ex and mother of four his kids, with Rupert Murdoch. She’s 59, he’s 84, and they’re getting married apparently. Crazy. I’d like to see that pre-nup!

Another grouping involved Brad Pitt, Cate Blanchett, and her husband, theater director Andrew Upton. Brad and Cate co-starred in “Babel,” a few years ago, and were very happy to see each other — as evidenced by this photo I organized. Pitt was there because his company produced “The Big Short,” after having an Oscar hit with “12 Years a Slave.” When I offered that he was on a roll as a producer, he replied: “And we’ve got more coming!”