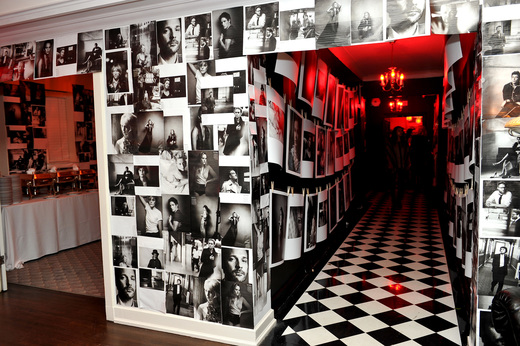 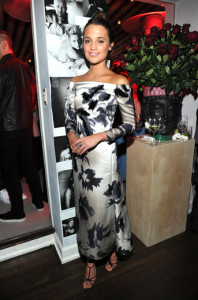 Alicia Vikander is this year’s actress launched into stardom — think Chastain, Lawrence, Blanchett, etc. She’s got two BAFTA nominations this morning, for “Ex Machina” and “The Danish Girl.” She’s nominated for the Golden Globes. Her Oscar nomination is around the corner. If you follow the tabloids, she dates Michael Fassbender. She’s also quite lovely.

Last night at W Magazine’s annual kickoff party on the 6th floor of the Chateau Marmont, Vikander told me the best story of the awards season. When her parents boarded their British Airways flight to Hollywood from Sweden, she gave them an incredible surprise– first class tickets upgraded from coach. It’s not like Alicia has a lot of money. She pieced together various upgrades from tickets she had this year, and paid for it herself.

“My parents live in a small village in Sweden,” she told me. “I’m waiting to hear from them. They must be shocked. They had tickets in economy!” I’m telling you, this girl was beaming with delight. Jack Huston– just about to break big– and Lily James (of Downton fame, Cinderella, etc) applauded her.

Lynn Hirschberg and W editor in chief Stefano Tonchi host this party with the Chateau owner and hotel mogul Andre Balazs. “Every year we try to make it smaller and it gets bigger!” red haired Lynn yelled to me over the din of actors, directors and fashionistas stuffed into the Chateau suite that spills out onto an enclosed terrace. Someone asked Lynn, one of my favorite all time movie writers, how she should be described. Doyenne? Is it too soon for that? I don’t think so.

The Chateau suite is so crowded– like a subway car at rush hour– that exuberance takes over just from the madness. Everyone is happy, from Downton Abbey star Joanna Froggatt (Anna) and her husband, James, who moved to L.A. three days ago– three days ago!!!– to a very sweet Kristen Wiig, who literally made herself into a wallflower in the hallway (“I can’t go in there!”).

There were lots of actresses– from Blanchett (who radiates glamour)– my pal “Room” star Brie Larson (also now in that Chastain-Lawrence galaxy)– to a contemplative Quentin Tarantino hanging out in the photo booth room accepting kudos from his fanatic fans in the industry. (You’d be surprised how A listers approach him– like he’s Yoda and Gandhi wrapped into one).

I ran into Gerald Butler– now this is a guy who looks like a Movie Star. He’s very happy to be in town because, he told me, all he’s been doing is working. “I made four films this year back to back!” he exclaimed.

Missing this year, thank good ness– the Cronuts that had been featured in the last few years. Instead dessert– after delicious Chateau truffle raviolis and more– were small glazed doughnuts stuffed with bacon. You read that right. But please tell my healthcare insurer I did not try one. Many did, and I think they were carried out on stretchers!