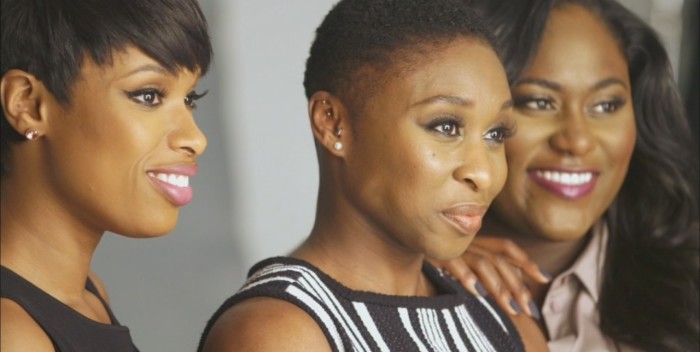 “The Color Purple” played on Broadway from 2005 to 2008 and no one really liked it. Good actors appeared in it, including Fantasia, and it didn’t matter. It was just all wrong, even with Oprah Winfrey as executive producer.

Now the musical based on Alice Walker’s beloved novel is back, but it’s completely different. Re-imagine by John Doyle, this “Color Purple” should be considered a new musical and not a revival. Last night at the much smaller Jacobs Theater (the first version was in the huge Broadway Theatre), “Color Purple” scored as an astonishing hit, bringing the audience to its feet before the show even ended.

Oscar winner Jennifer Hudson, looking for less responsibility and some fun, plays secondary character Shug Avery and she is a delight. Her Shug slithers sexily across the stage, and sings like an angel. Hudson will pick up a Tony next June for featured actress in a musical, I’m sure.

The “star” of this show, however, is overnight sensation Cynthia Erivo. She’s 27, and British. She came with this production from London. She has no idea how her world was changed Thursday night. She wakes up this morning as the toast of the town. Hudson, who’s been there, can be of some guidance. (At 34, Jennifer is the “elder.” Hah!)

During the curtain calls, Alice Walker came out on stage to join Marsha Norman (who wrote the script from Walker’s book) and songwriter Ally Willis (who won the night for most eccentric look). The audience cheered for Walker as if she were a rock star.

Director John Doyle is much awarded and highly regarded for paring big shows down, restoring them to the their true personalities, finding the heart and soul that’s sometimes been lost. This is what he did with “The Color Purple.” He told me after the show that he purposely went back to the original novel. The result is more of a play with music than a show stopping musical.

The real tragedies of Celie and Nettie’s lives are vivid now. The glamour of Shug, the transformation of the heartless “Mister” (or Albert) to some kind of enlightenment, the real wisdom of Sofia– are now grounded for the first time since the movie.

MIA last night– Whoopi Goldberg, who starred in the film, and Oprah, who is still a producer. Who was there: Candy Spelling, a big producer on this show, and a favorite on the Broadway scene these days. She brought along son Randy, former actor, now a life coach and author. He looks just like his late dad, Aaron Spelling.

JHud brought her life partner David Otunga, their six year old son David Jr., and David’s nephew. All the men were decked out in matching cobalt blue jackets. Jennifer was stunning in a gorgeous gown. She’s in the show until May. It’s not long enough. Write “The Color Purple” in now as Best Revival of a Musical. Or “miraculous” revival of a musical.