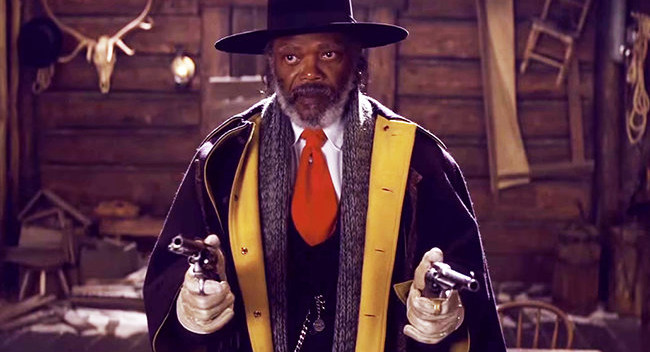 Quentin Tarantino’s “The Hateful Eight,” from the Weinstein Company, had its much-anticipated premiere last night at the famed Cinerama Dome in Hollywood. Quentin was a cross between a Southern Preacher and Boxing Announcer as he implored the audience, “Is everyone at the Dome ready to fill this audience with hate? Come on bitches, are you ready?”

Before that though Bob Weinstein addressed the crowd: ”From the beginning Quentin explained that he wanted to shoot in 70mm, since he wanted to distribute the film as a roadshow experience much like they did in the 1950’s and 60s. Quentin told me that we didn’t have to do it, but I told him, ‘Fuck yeah Quentin. You better believe I’m in on this mission.”

Quentin talked about the Weinstein brothers. (Harvey was sitting in the back row in the orchestra watching intensely and laughing at Quentin’s antics.)“You guys are such softies, you all don’t know what pushovers they really are.” He continued, “We talked about this in my backyard by the pool and the deal was done.”

The film is long, three hours with an intermission, which was quite the scene. Eli Roth, Waltz and Harvey Weinstein huddled in a corner, Goldie Hawn and Kurt chatted with Dr. Oz of all people, and VIPS were running to the concession to get free candy. Producer Stacey Sher and Harvey were admonishing people to go in so they wouldn’t miss the beginning of the second part. “The Hateful Eight,” which will be released on Dec. 25th in the 70 mm format and will go wide on Jan. 8th with a digital format.