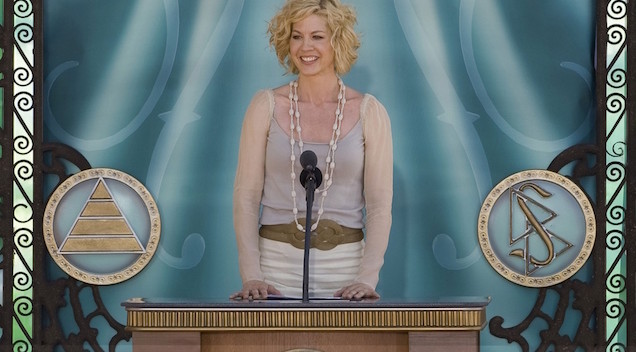 Legoland in Carlsbad, California must be desperate for celebrity involvement. In exchange for a Christmas tree lighting appearance by TV actress Jenna Elfman, Lego donated $10,000 to a Scientology group in honor of the cult member.

#LEGOLANDCA is donating $10,000 on @JennaElfman behalf to Youth for Human Rights, a charity aimed at teaching youth about human rights

The donation to YHRI has already sparked outrage on Twitter. I discovered it thanks to the indefatigable Tony Ortega, who writes a fuller version of the story on his website. Ortega writes:

“Youth for Human Rights International (YHRI) was founded in 2001 by Scientologist Dr. Mary Shuttleworth, who has also tried to push Scientology on the nation’s schools through the front group Applied Scholastics. Like other Church of Scientology front groups, YHRI pretends to have a benign purpose that has nothing to do with Scientology. In this case, YHRI is one of several groups under the umbrella United for Human Rights that has created videos and pamphlets based on the principles spelled out in a 1948 United Nations proclamation, the Universal Declaration of Human Rights.”

A little addition: Actress Marisol Nichols is the Advisory Board Chairperson for YHRI. She’s a huge Scientologist, with dozens of courses behind her, and no doubt millions of dollars in donations raised.