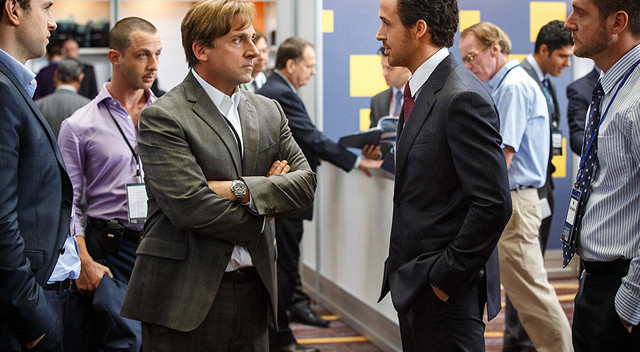 Just another Sunday night in Gotham as Adam McKay’s Oscar heavy “The Big Short” landed in New York with a private screening at MoMA followed by a swanky dinner at the Monkey Bar.

Among the guests were hosts Tina Fey and Lorne Michaels, along with cast members Steve Carell, Ryan Gosling, Jeremy Strong, Finn Wittrock, John Magaro, Byron Mann, and Hamish Linklater (with girlfriend, and, ahem, super actress Lily Rabe). Author Michael Lewis, who wrote the book upon which the was based, was there along with screenwriter Charles Randolph and director Adam McKay (who made one of my favorite films, “The Other Guys.”)

Other stars? Yep. Sir Paul McCartney and wife Nancy showed up for the MoMA part of the night, along with Bob Balaban, Mamie Gummer, David Tennant (the actor who plays “Dr. Who”).

You know Paramount is serious when studio chief Brad Grey comes to town. “The Big Short” is their Oscar entry, and it’s a doozy. This is almost a companion piece to “The Wolf of Wall Street,” except this story of finance and greed is more current– McKay and co. wittily detail the bank bailout and stock market disaster that brought the 2008 recession. Brad Pitt’s Plan B produced, and Brad makes an extended cameo half way through the film that absolves him for any cinematic indulgences this year.

Steve Carell leads the cast (and may well reap an Oscar nomination) with the outstanding Christian Bale, the terrific Gosling and a superior ensemble (my old friend Al Sapienza even puts in an appearance) cast. Marisa Tomei and Melissa Leo– two Oscar winners– pull the weight on the female side.

There are also surprise appearances from some unlikely people playing themselves including Selena Gomez, Anthony Bourdain, and a very sexy Margot Robbie in a bathtub.

At the Monkey Bar party, former “Law & Order” actress Carey Lowell (and former Mrs. Richard Gere, and Griffin Dunne) came with media honcho Tom Freston. Ryan Gosling and I chatted about his adorable 14 month old daughter Esmeralda. Steve Carell marveled at being the lead in yet another serious film (he was so memorable in “Foxcatcher”). Lorne Michaels accepted kudos on his “Adele Week.” Gummer invited us all to come see her in a much praised limited run play called “Ugly Lies the Bone.” Linklater and Rabe — NY theater stars– were excited to meet Mark Strong, currently starring on Broadway in “A View from the Bridge.”

Gosling, by the way, hosts “SNL” next weekend with Leon Bridges as musical guest.

Brad Pitt hits town Monday night for the movie’s real premiere at the Ziegfeld followed by an old fashioned gala in mid town. He and his Plan B team are on a roll– they made “12 Years a Slave”–since “The Big Short” is about to make a big noise.