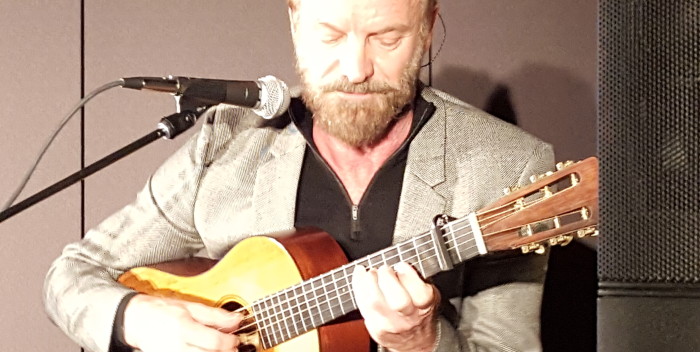 Looking for the perfect art book as a Christmas gift for the millionaire in your life? Look no further than Sting’s coming folio with famed artist Stephen Hannock. Last night at the top of the Hearst Publications building, the pair showed off their collaboration for art collectors– named “The Last Ship” for the Tony Award nominated collection of songs that appeared in Sting’s musical of the same name earlier this year.

Hannock visited Sting’s hometown of Newcastle and came up with six or seven amazing woodcuts depicting the lost shipyard and environs of Wallsend, where Sting grew up, facing beautifully printed sheets of Sting’s lyrics. Thanks to Two Ponds Press they are producing just 75– that’s right, just 75– of these collectible tomes which will be ready by April 2016. But apparently you order them now from Two Ponds because as demand increases, so does the price.

To get the Hearsters excited– including Ellen Levine, the goddess of Hearst, and Glenda Bailey, editor in chief of Harper’s Bazaar– Sting sat in a chair on a small riser and performed three songs from the show — the haunting title track, the jaunty “Dead Man’s Boots,” and the beautifully melodic “The Night the Pugilist Learned How to Dance.” I’m told he had pre-show jitters– playing for 40 people– but you wouldn’t have known it when he took the stage.

Also in the audience: Ralph Schlosstein, CEO and husband of the US Ambassador to France, Jane Hartley, as well as trumpeter Chris Botti, famed artist Stephen Sumner (no relation to Sting aka Gordon Sumner, but husband to Bailey, btw), and Spotify creative global chief Richard Frankel. The limited edition would have sold out right away, but Two Ponds hasn’t started taking orders yet.

Hannock, by the way, is one of my favorite artists. His landscapes are so gorgeous, you could actually imagine leaving the city and living in one. His works are in the permanent collections of places like the Whitney Museum and Yale University Art Gallery. The landscapes are likened to the work of the Hudson River School painters such as Thomas Cole and Frederic Church. Among his collectors are Tom Brokaw and wife Meredith.

The “Last Ship” woodcuts are reminiscent of the great works of the WPA in the 1930s. The printing process– done in Western Massachusetts- is sort of remarkable. One of woodcuts in the collection went through a 27 color process!