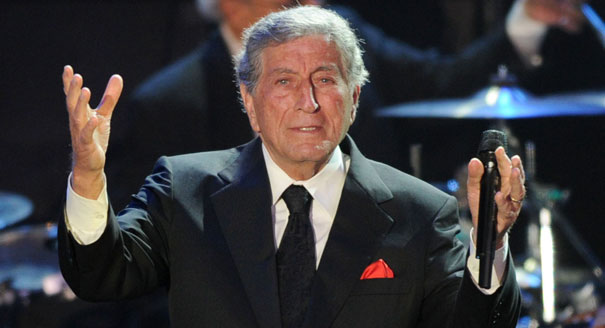 Swingin’ Tony Bennett, 89, came to the Broadway opening night of Gloria Estefan’s “On Your Feet” with wife Susan and a lot of plans. Tony just released a new album (“The Silver Lining”) with piano great Bill Charlap, just minutes after having an international hit singing duets with Lady Gaga on “Cheek to Cheek.”

So what next? “I’m going to be 90,” Tony said. I asked him, what will he do? For 85, he performed at the Metropolitan Opera House. Tony told me he wants to celebrate his 90th birthday next August 3rd with a concert in Central Park. He can do it, too. What else? “A Cole Porter album with Lady Gaga,” Tony said. The pair are gearing up for a private gig as well. Tony never stops!

The golden throated Bennett wasn’t the only famous singer at “On Your Feet.” In the audience were also Bette Midler, who came with her husband, Martin, and their actress daughter Sophie van Haselberg; and the great Frankie Valli, who told me he wants to bring the Four Seasons back to Broadway next year. This Sunday, “Jersey Boys” celebrates its 10th anniversary on Broadway. But Frankie can’t come– he’s working!

“On Your Feet” also pulled in Diane Sawyer, who came solo and worked on her smart phone during intermission. She said she didn’t know much about the planned memorial for her late husband, Mike Nichols, this Sunday.

Other guests at the big premiere at the Marriott Marquis included famed comedian David Steinberg, as well as Caroline Hirsch and Andrew Fox, planning their Stand Up for Heroes/Bob Woodruff extravaganza next Tuesday at the Theater at MSG. You do know that Bruce Springsteen and Jerry Seinfeld are headliners.

You know, the audience loved “On Your Feet,” which is kind of a schizophrenic musical. It alternates between Gloria’s many anthemic ballad hits and very hot salsa music that makes the audience get up and dance. It’s led by an extremely talented cast and set against one of David Rockwell’s sparer but vivid sets. You exit the theater on a high, which is always a good sign.

“On Your Feet” has a niche audience in the Latin community, plus Estefan fans from all over the world. That should keep the show on its feet for some time to come!