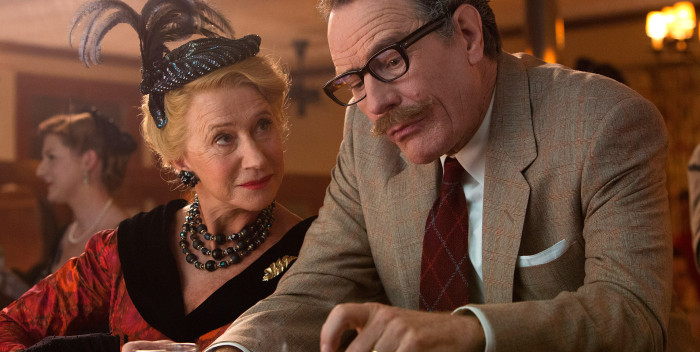 Dame Helen Mirren moves through Jay Roach’s “Trumbo” as gossip columnist Hedda Hopper like a viper dancing to cool jazz music. She’s completely evil and delicious and you love her. At the star studded after party for “Trumbo” last night at Villagio on Central Park South, the subject of British phone hacking came up in regard to privacy and gossip. Was Dame Helen hacked? “Me?” she cried. “I wish! I’m not big enough for them!” she laughed.

Diane Lane brought her beautiful 22 year old daughter Eleanor Lambert (father is Christopher Lambert aka Greystoke), who was star struck meeting Cranston. Does she want to be an actor, I asked the stunning Lane? “No, I think she wants to be a journalist,” Diane said. (“I’ll talk her out of that,” I responded.)

Cranston– exceptional as the crusading Trumbo– is so full of projects he can barely see straight. The former Dr. Tim Watley from “Seinfeld” has his “All the Way” LBJ movie at HBO with “Trumbo” director Jay Roach, a new series on Amazon, a movie he’s just made directed by James Franco, another he’s making co-starring Franco, and Wes Anderson’s new animated film.

Trumbo spent a lot of time in the bathtub writing scripts, which Cranston has replicated with director Jay Roach’s help. Was it cold? Was their shrinkage?

“What? No, haha,” Cranston said. “They kept filling the tub with warm water. It went on for hours and hours.”

Dalton Trumbo, if you don’t know, was the Oscar winning screenwriter of “Roman Holiday,” “The Brave Ones,” “Spartacus,” and dozens of other films– dozens and dozens, he was very prolific. But in the early 1950s he was blacklisted by the House Unamerican Activities Committee because he was a Communist.

For a decade he couldn’t use his own name on scripts, and neither could many other screenwriters. So Trumbo organized a group that wrote under pseudonyms while the famous Red Scare and witch hunt of the 50s dragged on, and destroyed lives. Trumbo is also known as the author of the searing 1938 anti-war novel, “Johnny Got His Gun,” which was required reading in the late 60s and early 70s when young people read books other than “Twilight.” (The 1971 movie is worth watching on amazon.)

The Blacklist affected thousands who aren’t portrayed in the film including later Oscar winner Lee Grant, Tony winner Zero Mostel, and lots of actors and crew on TV and in theater whose faces you might know better than their names. Lives were destroyed.  Among those depicted in the film are the famed actor Edward G. Robinson, who named names but still suffered. Michael Stuhlbarg does a beautiful job portraying Robinson’s agony and decline. “Trumbo” also has beautiful work from John Goodman, Elle Fanning, Alan Tudyk, John Getz, Roger Bart, David James Elliott, Richard Portnow, Stephen Root, and Dean O’Gorman as a spot-on Kirk Douglas.