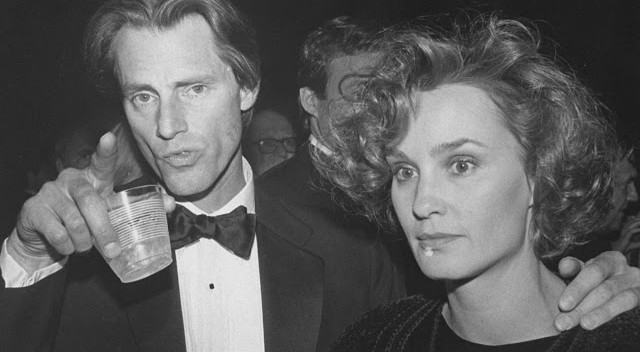 Jessica Lange wasn’t photographed but she was in the audience Thursday night and very much in evidence at the after party for the Broadway debut of “Fool for Love.” This is the legendary one act play written by her partner of 18 years (and father of her three children) actor-playwright Sam Shepard. The couple has been apart since 2010. Jessica was low key but very much there to support Sam, who is known almost more for his canon of plays like “True West” and “A Lie of the Mind” than for his heralded acting.

Lange wasn’t the only bold face name for “Fool for Love,” which stars Sam Rockwell, Nina Arianda, Gordon Joseph Weiss and Tom Pelphrey. The show is a hit and each of the actors is terrific. Fans of “Banshee” on Cinemax, and of the beloved CBS soap “Guiding Light” from a decade ago will recognize Pelphrey, who at 33 is ready to become a movie star. (He won two Emmys on “GL” before Procter & Gamble gutted it.) He’s a hard working “overnight sensation.”

Other A listers who made the scene last night included Emily Blunt and John Krasinski, Jason Sudeikis and Olivia Wilde, Richard Kind (sporting a mustache after shooting “Gotham”), and Margaret Colin (joking about not being in the “Independence Day” sequel– “they killed me off, no cameo!”).

A lot of us discussed seeing the original “Fool for Love” back in 1983 with Ed Harris and Kathy Baker, then Bruce Willis (pre-“Moonlighting”) at Circle Rep in the West Village. Those were the halcyon days of off Broadway, when seeing a new Sam Shepard or Lanford Wilson play with an exciting group of actors (like Willis, or Will Patton, etc) was the hot hot hot thing to do. No one had phones, or the internet or any other diversion.

I was thinking of that last night as the lights went down at the Samuel G. Friedman theater. A young man sitting in front of me promptly took out his cell phone and began either taking pictures or recording the show. I whacked him on the shoulder with my Playbill and he put it down. Beware: this is what I have been reduced to when people take out phones in darkened theaters. It’s an illness that’s seeped through even the most sophisticated audiences.

I did talk to Sam Shepard at the after party, as well as Nina Arianda– one of our great young actresses, but not Rockwell, who left almost immediately. This usually indicates bad reviews, but “Fool for Love” is effusively praised today by all the critics– and rightfully so. Manhattan Theater Club’s Lynne Meadow and Barry Grove were smart to bring it on from the Williamstown Theater.

Shephard told me that even though he’s a main character in it, he’s never read Patti Smith’s wonderful memoir called “Just Kids.” However, he has read the new volume, entitled “M Train.” Sam told me has a memoir, not yet finished, that will be published by Knopf one day soon. He’s finishing a new screenplay, too. Sam is featured in the great new Netflix series “Bloodline” and has not one but three big films set for release in 2016.

Photo from  LIFE magazine of what real, glamorous, sexy movie stars used to look like.