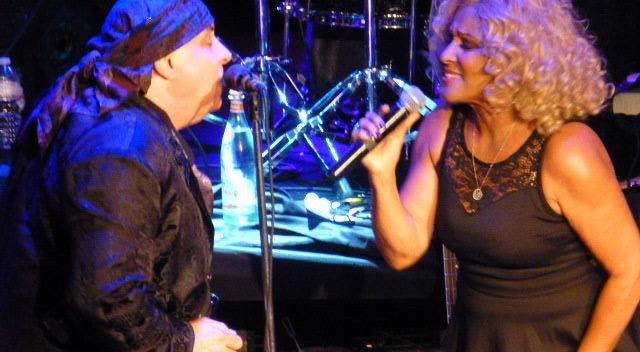 In the middle of all that Emmy mishegos last night, between the Governor’s Ball and the HBO party, I raced over to the famed Whisky A Go Go on Sunset. Legendary singer Darlene Love was launching her album produced by Little Steven van Zandt, with a full orchestra crammed onto the Whisky’s tiny stage. There was a full horn section and four back up singers. Little Steven not only ran the band, played lead guitar but also sang with Darlene on a duet– “Still too Soon to Know.” Steve should sing more often. What a show!

Since HBO was beckoning I could only stay for five songs. They were delicious. Darlene was in fine voice, and Little Steven was in top form. The set was scheduled for two hours (you know E Street has no bounds). They may still be there! I watched from a perch above the stage with Steve’s beautiful and multi talented wife Maureen, Michael des Barres, and with Jimmy Iovine.. Yes, the the Apple/Beats impresario pulled up to the time-beaten Whisky in a chauffeur driven sleek black and big Mercedes. He loves music!

Darlene’s album is called “Introducing Darlene Love.” I hope she and the gang will come to the Cutting Room in NY and put on the same show. My fellow New Yorkers shouldn’t be deprived!

Sleeper songs on the album: “Among the Believers” and “Sweet Freedom.” http://www.amazon.com/Introducing-Darlene-Love/dp/B012Z769SC