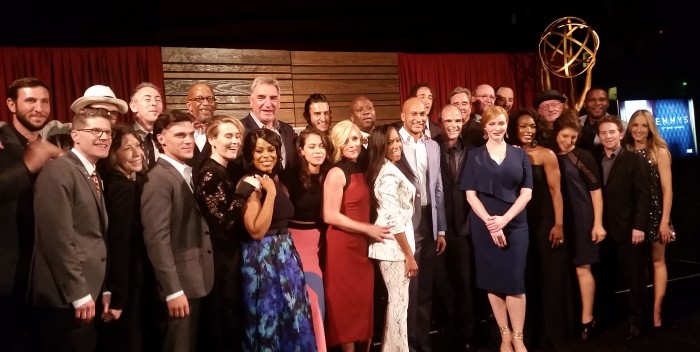 Emmy parties in full swing all day Saturday, many outdoors even though the heat was scorching. Hollywood parties are noted for the huge amount of food available everywhere in chafing dishes. Yet no one eats it because they’re all on weird diets so they don’t look like blobs on TV. Hah! The New Yorkers were all happy to dig in.

At the Pacific Design Center, the television academy threw its annual performers reception. All the nominees are invited. The bulk of those who actually attend are in supporting categories mostly, although Oscar winner Adrien Brody, one of our New York faves, came with his parents. (His mom is legendary photographer Sylvia Plachy.) Christina Hendricks was there with husband Geoffrey Arend, who’s so good on “Madame Secretary.”

Best talk was with William H. Macy and Felicity Huffman, who stayed til the end and brought along the creators of “American Crime Story,” my favorite show of this past winter.

On stage, the magnificent Lily Tomlin, a Governor of the Academy, handed out certificates to the nominees. Among them was the effervescent Titus Burgess, from “The Unbreakable Kimmy Schmidt.” As he crossed the stage, Tituss took his certificate and then just about pounced on Lily, saying, not once but twice, loudly: “I’m obsessed with you!” Tomlin looked frightened but in a good way.

Earlier, at the BAFTA tea at SLS Hotel: a flurry of “Downton”-ites including Julian Fellowes and statuesque beauty of a wife, Emma, who were treated like rock stars along with Lesley Niccol (Mrs. Patmore), Jim Carter (Mr. Carson), and Laura Carmichael (Lady Edith). The final episode has been completed. The first new episode airs tonight in the UK. Mum’s the word on what happens and how it all ends. But Emma Fellowes told me she cried all the way through the finale. And through the penultimate episode. I’m pretty sure Maggie Smith’s Dowager Countess will be offed at the very very end, but no one would confirm it.

My new favorite people are Uzo Aduba, the amazing actress who plays Suzanne “Crazy Eyes” Warren on “Orange is the New Black,” and her sister, Chioma. Totally charming and fun. Chioma works in advertising in Massachusetts. Uzo told me that since “Orange” is a bona fide hit she’s finally gotten a real apartment in hip hip Brooklyn. Overnight sensation? This woman is a serious theater actress with a list of credits and reviews to be envied. And let me tell you, crazy eyes she’s not. Beautiful eyes.

Finally: Tara Reid at every party, a slip of a thing. Welcomed by all like celebrity royalty.

At Soho House last night: Kelly Rutherford, having a low key dinner with friends. She told me she’s getting back to work and planning her next trip to Monaco to see her kids. Everyone is outraged that American judges let her ex husband take the kids back there. There’s more to this story…

photo c2015 Showbiz411 by Melissa Rappaport, RappAroundPR (many thanks)