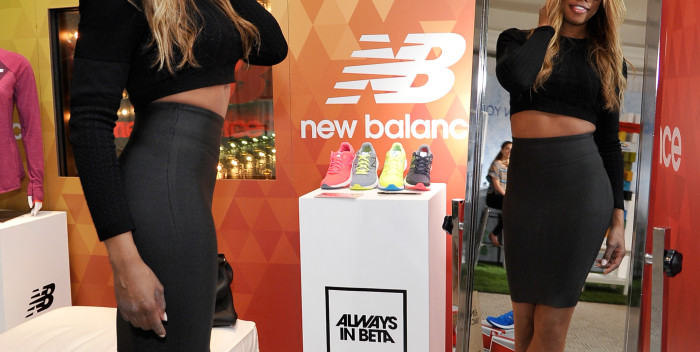 Jon Lovitz was pimping his dog Jerry at the plugged in Extra + On3 Productions 1st Annual Weekend Of 1 Lounge, produced by On 3 Productions to celebrate an EXTRAordinary year of television.  Held at the chrome-y London West Hollywood, this hopping event was hosted by Extra’s Mario Lopez, Tracey Edmonds and Charissa Thompson.

The uber popular New Balance was front and center, gifting their newest Vazee Rush running shoes and apparel from its upcoming Fall 2015 collections.  New Balance made a significant donation to the Susan G. Komen Foundations on behalf of each and every talent that stopped by.  The celebs also donated a pair of the pink Lace Up for the Cure Vazee Pace shoes to a breast cancer survivor of their choice.  Los Angeleno’s way love their New Balance.  Speaking about love, who doesn’t love to sleep and Simmons Beautyrest let celebs take a much-needed rest and gifted their Diamond Lux pillows and Recharge Hybrid mattress.  Celebs jumped into bed, including Gina Rodriguez, Anthony Edwards and Felicity Huffman.

But the funniest of all was natch, Jon Lovitz, who brought his dog Jerry with him.  Jerry made himself quite comfy and Jon quipped, “hey you want to use him, pay me!”

Centrum was showing their newest, “VitaMints,” a multi vitamin that’s taken like a mint.  Jane Lynch was an instant fan, along with the Fitbit activity tracker to monitor your health.  Cottonelle, with their “commando campaign,” had celebs posing for famed “butt sketch” artist Krandel Lee Newton drawing their respective tushes, which most were game to do, along with laughing a lot.  Cottonelle also gifted concierge cards for a one-year supply of toilet paper, a Queen Bee Salon & Spa house call and a one-year subscription to Apple Music.  Guests were also thrilled with the Luxe App station, an app and service that sends valets to park your car no matter where you are, and they gave out one year unlimited on-demand personal valet parking services.

Shea Chic owner San Diego based April Leffingwell had her proud Mom helping her out, and the celebs loves her brand of specialty, as she says, “handmade with love,” natural products including soaps and lotions and heavenly shea butters. .  Shea is an avid pet rescuer and her dog Soap, was being loved on by the VIP’s.

If that weren’t enough, Extra and On3 also gifted  Batiste Dry Shampoo, Mira Books, Donsuemor Artisanal European baked goods, Andiz one of a kind handmade boots, RA_Bar Beauty services, Matcha Marketplace Green Tea Oatmeal and Dr. Sam Saleh Laser teeth whitening.  The crème de la crème was a one year membership to Crunch, hands down the most popular gym in LA and across the country.

Guests munched on delish Sabra hummus and sipped signature cocktails by Rum Diplomatico. No wonder On3 Productions hits a grand slam every time!