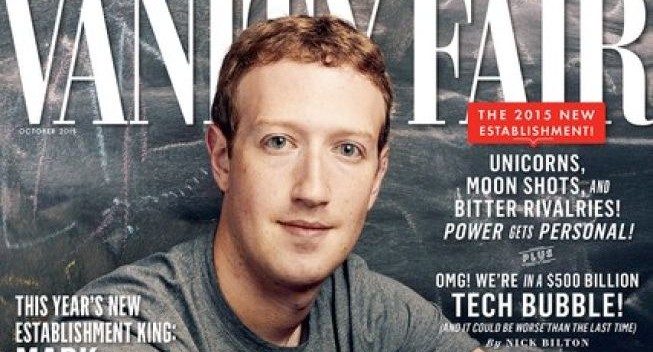 Who are the leaders in entertainment from the New Establishment? Vanity Fair put only two in its top 30: Amy Schumer (15) and John Oliver (28).

Otherwise, the top 30 starts with Mark Zuckerberg of Facebook fame, who’s on the cover, and you can guess from there. The leaders of Uber, Air bnb, Instagram and so on fill up the list.

Google’s Larry Page and Sergey Brin fell from number 2 to 5.

After Schumer and Oliver the next actor who comes up on the list is Jessica Alba, at 36. Her Honest Company is worth $200 million. Her husband’s name, by the way, is Cash. Really. Actor Jared Leto is at number 38.

Even odder: Hillary Clinton made a separate list of top 25 entertainment and media types. She’s the lone politician. I guess Vanity Fair finds her entertaining.

The jockeying for position on these lists must be insane. Who’s out, who’s in, etc. must have kept publicists burning up their mobile minutes way into the night.