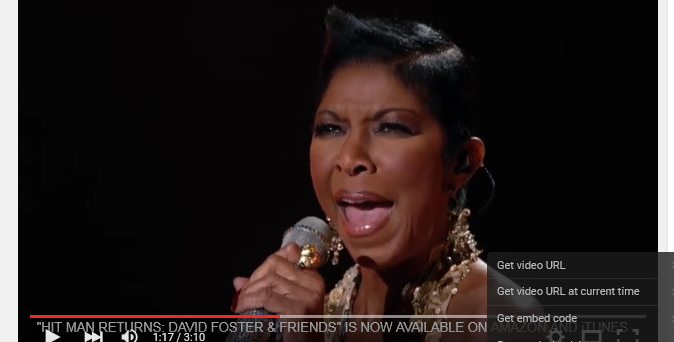 Natalie Cole didn’t want to be left out of all that rock star talk this weekend in the Hamptons. I got to hear the magnificent pop-jazz-R&B legend sing like an angel at the Parrish Art Museum in Southampton on Saturday night. The occasion was a glitzy dinner to raise money for Mike Milken’s Prostate Cancer Foundation held in conjunction with the 11th Annual Charles Evans PCF Pro-Am Tennis Tournament.

They raised over $4 million with the help of a lightning round five minute auction in which Milken, ever persuasive, got a bunch of good Samaritans to pony up $75,000 apiece to support young scientists. Bonnie Pfeifer Evans, who runs the Charles Evans Foundation in memory of her husband, was among the hosts. Her late husband Charles, brother of famed movie producer Robert Evans, owned the fashion line Evan Picone. Bonnie is a top top top real estate broker at Corcoran.

“American Idol” grad and former winner Ruben Studdard — one of the sweetest guys in the world with a big heart and a big voice– also performed. He told me he’s thinking of moving from Alabama to Harlem. Why? He wants to be where Langston Hughes once lived. Just for that poetic response, Bonnie Evans should find him a free abode! Ruben came courtesy of record producer David Foster, who also performed and introduced some of his regular singers to the crowd.

Natalie has just returned from a big tour of Asian resorts with Foster and Ruben et al. She told me the elevations were so high she could barely breathe, but her voice sounded better than ever. She is “Unforgettable.” She’s on her way home to L.A. now to get some much needed R n R. Natalie is one of our national treasures, folks.

By the way, that’s Natalie’s original 1976 hit “This Will Be” which we hear on the ubiquitous e-Harmony commercials on TV. She wrote it, sang it, and it holds up like a motha 40 years later. (She was very young when it hit.) For every date on e-Harmony who hums that song, Natalie should get a gift from Neil Clark Warren. They’re a $300 million company, and the amazing Natalie is their standard bearer!

SIGHTINGS: What are people doing with their summer?

HBO’s Boardwalk Empire star Anatol Yusef pulled up to the bar at the Bobby Van’s in Times Square, enjoying an afternoon martini…

New York Jets’ Geno Smith tackled a friend and brought them to lunch in the wine cellar at Philippe on East 60th St. Scrimmaging at a separate table: St. John’s University Coach Chris Mullins and his staff.

Thank goodness Sotto Sopra opened in Amagansett, the quaint village east of East Hampton and the last stop before the hunt for Montauk on Route 27. In the last week, I’m told, Alec & Hilaria Baldwin were seen dining on with 4 guests while producer Scott Rudin was eating with a guest. You might call this place the Nick and Toni’s of the East, as Sir Paul McCartney accompanied by his wife, Nancy and a group of 3 adults and 6 children were spotted there last week.

And Gwyneth Paltrow? She knows where to shop:Christopher Fischer’s Southampton Boutique and salon of high end cashmere. She was browsing his new Fall collection recently even in 90 degree heat. Paltrow plans ahead…