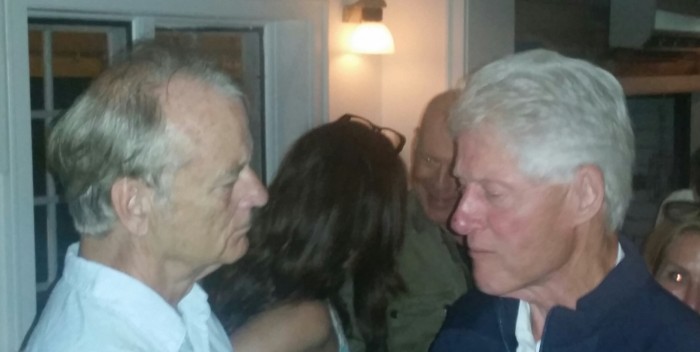 The movie is called Rock the Kasbah, so rockers turned out last night to celebrate Barry Levinson’s new comedy starring Bill Murray and Bruce Willis. And I do mean the ultimate rock star, former president Bill Clinton, was front and center, mixing and mingling at East Hampton’s Blue Parrot with — are you ready– Paul McCartney, Bruce Springsteen, Jon Bon Jovi, John Mellencamp, and Roger Waters all in the same, small private space.

Not only that: screenwriter Mitch Glazer invited a friend, someone I really always wanted to meet, rocker Jenny Lewis, formerly of the band Rilo Kiley and now on her own. Jenny and partner Johnathan Rice wrote “Cold One,” that wonderful song Meryl Streep sings in “Ricki and the Flash.”

Plus Christie Brinkley, looking more gorgeous and younger than ever, brought her burgeoning actor son Jack.

But back to the party, where Bruce mixed and mingled chatting with Paul McCartney intensely. Bruce told me he rarely comes to the Hamptons but was accompanying his equestrian daughter Jessica to the Hamptons Classic. We talked about Bruce’s cameo in Darlene Love’s new video. “Have you seen it?” he said, laughing. He and Steve van Zandt are clowning around in Asbury Park.

McCartney brought his beautiful wife Nancy, and they were introduced to John Mellencamp, who’s mentioned as a punchline in the movie (he’s friends with Glazer). Bon Jovi accepted compliments on his new album, “Burning Bridges,” which debuted in the top 5 this past week.

Meantime, Bill Clinton — looking very well, sun tanned and speaking in that buttery Southern accent– met everyone. He told actor-director Bob Balaban, who introduced himself: “I know who you are. I’m a big fan.” Balaban floated away.

More on Clinton in my next item…