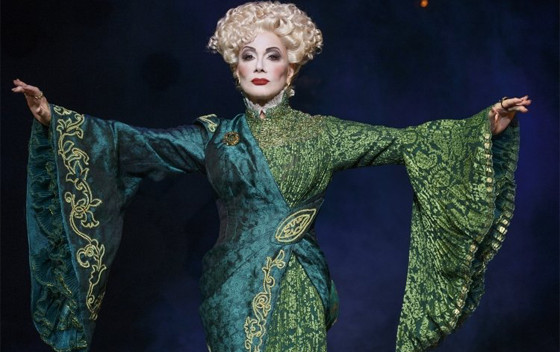 Guess what? I’d never seen “Wicked” on Broadway before last night. It opened 12 years ago with Kristin Chenoweth and Idina Menzel, made millions, launched careers, and played all over the Milky Way. All I knew were the commercials.

So last night I finally had the chance to see it because the producers have recently added two heavy hitters to the already talented cast: Michele Lee, double Tony nominee and 14 year star of TV’s “Knots Landing” is playing Madame Morrible. Fred Applegate, a TV and Broadway veteran who just appeared to acclaim in Sting’s “The Last Ship” is The Wizard of Oz. They’ll be there all this fall, too. What a delight to see both of them on stage.

Michele is playing Madame Morrible with seething delight, going from what looks like patrician passivity to delicious mayhem. She’s the one who predicts the cyclone that will bring Dorothy’s house to Oz. (Lee has a great voice and sings a lot in the show. But I wish composer Stephen Schwartz would give Madame Morrible her own show stopper.)

Since she and the Wizard are allied in many plots, Lee’s arrival was timed with Applegate’s. They told me over dinner they’re having a ball. Pay close attention because they have their own little back story going on stage. After all this time, I asked Fred, isn’t “Wicked” sort of like a machine? He jumped in: “No, I gotta tell you, they are the nicest people. Everything is hands on. It’s sort of brilliant.”

Michele is loving her vivacious and un-witchlike co-stars Caroline Bowman and Kara Lindsay, who play Elphaba (the Wicked Witch of the West) and Glinda, the Good Witch.

Ironically, Michele opened in “Seesaw,” the Cy Coleman classic, in 1973 at the very same theater. It’s the Gershwin now. It was called the Uris then. She was very young. Last year she gave up her New York apartment to live full time in L.A. Of course, that’s when the call came for “Wicked.” My guess is she’ll roll right into another musical when her “Wicked” term is over.

After the show we walked over to Bar Centrale for a drink and a bite. West 46th looked pretty quiet for 11:30pm. There was no one in the joint except Meryl Streep having a chat with famed photographer Brigitte Lacombe. Danny Strong, who created “Empire,” was eating with pals. Very quiet. No one famous.