Uggie, the amazing Jack Russell terrier who stole the Oscar winning movie “The Artist,” has passed away at age 13. Well, he was put to sleep apparently according to a Facebook post. Uggie became an overnight sensation after starring in “The Artist” with Jean DuJardin and Berenice Bejo. He danced on stages all over the world, and attended the Academy Awards. The night before the Oscars he was feted at The Weinstein Company party at Soho House in Los Angeles, where he posed all night for pictures and signed autographs. I’ll never forget his trainer carrying him around on a pillow. The word was that Uggie had picked up a publicist and agent, wouldn’t do interviews, and had become very difficult. But really, he was a charmer. He even published a memoir in 2012. 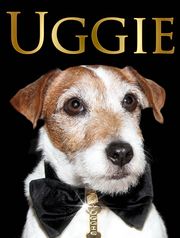 from Facebook:
We regret to inform to all our friends, family and Uggie’s fans that our beloved boy has passed away. We were not planning on posting anything until we healed a little more but unfortunately somebody leaked it to TMZ and they will be announcing it. In short, Uggie had a cancerous tumor in the prostate and is now in a better place not feeling pain. Thank you for your support, I will not be reading any comments for a while as it is too painful at the moment.