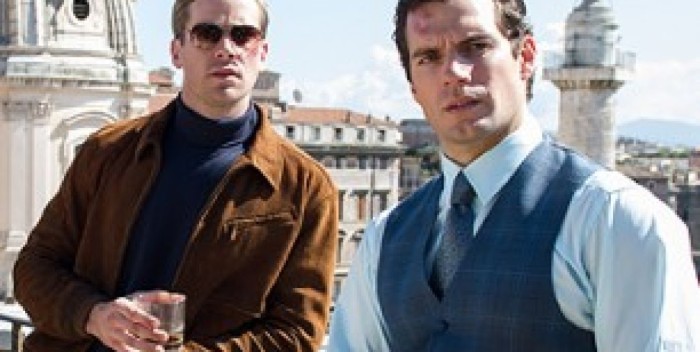 “The Man from UNCLE” is back and I’m ready for the sequel. Guy Ritchie has made such a fun, stylish origins story film about Napoleon Solo and Ilya Kuryakin that they could absolutely have played another installment at the Ziegfeld and everyone would have stayed.

And the audience included Ritchie’s kids with Madonna, son Rocco, and David Banda, the little boy they adopted from Malawi. I met the kids at the screening and they are very nice. They were quite excited for their dad.

Also in the audience: “12 Years a Slave” Oscar winning director Steve McQueen, “Crash” Oscar winning director Paul Haggis, Broadway stars Leanne Cope and Sara Esty from “An American in Paris,” Mick Jones from Foreigner with daughter Annabelle, and Maureen and Steve van Zandt. Later at the after party at the Bowery Hotel, we ran into MSNBC’s Lawrence O’Donnell looking dapper after a day on the air.

At the premiere party, Armie Hammer — charming and affable, as always, a young Robert Redford from “The Way We Were” days– took pictures with Cope and her Broadway pals. They were, let’s say, agog. Hammer tried to dissuade them about his matinee idol status. “How about that Henry?” he said of his co-star who also plays Superman. “He’s carved out of marble!”

Will there be a sequel to “UNCLE,” I asked? Armie, bluntly said: “You never know. That’s what we thought about the Lone Ranger. And look what happened. It took me a long time to get over that.”

But back to “UNCLE”: Guy Ritchie is really the star of “The Man from UNCLE” even though he’s not in the movie. It’s just that as the director, Ritchie’s presence, personality and artistic stamp are all over the movie, and it’s a good thing. Henry Cavill and Armie Hammer are the actors, and they’re perfectly suave as Napoleon Solo and Ilya Kuryakin. Hugh Grant doesn’t have enough to do as Mr. Waverly, head of British Intelligence, but he might in a sequel– which I’d like to see. This movie is an origins story– it brings up to the first episode of the TV show. And it’s incredibly entertaining.

“The Man from UNCLE” is also beautifully shot, has a real sense of time (the 60s), place (Rome) and attitude (glib, willful, fun). Joanna Johnston’s costumes are sensational riffs on mod apparel, but in their own groovy-ness. Oliver Scholl’s production design is cool, cool, cool. And the props– including a mod one piece phone with the dial under the base– are dead on perfect.

The secret stars of “UNCLE” might turn out to be the ladies. Alicia Vikander and Elizabeth Debicki are absolutely essential, charming and sexy as respectively, a heroine and a villainess to counterpoint the guys. One or two movies from now you’re going to look back and say ‘Oh I know them.’ Swede Vikander with a swoony British sounding accent will be in “The Danish Girl” this fall. Debicki was the essential Jordan Baker in “The Great Gatsby” and she’s Lady McDuff in “MacBeth” also this fall starring Vikander’s boyfriend Michael Fassbender. Each of them is hot stuff.

PS As with Mission Impossible, Man from UNCLE is all about the music. The soundtrack is a lush combination of the original theme music and various similar takes including some uses of the scores from the original series. “The Man from UNCLE” theme was written by Jerry Goldsmith,  who also wrote music for the show. But many other important composers contributed including Lalo Schifrin (Mission Impossible). All I know is, I want this CD ASAP.