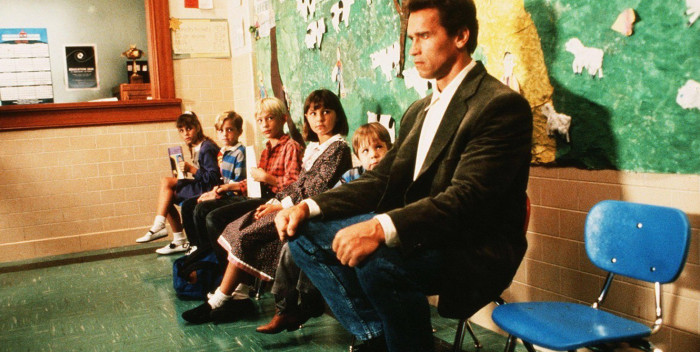 Since everything in the world is being remade, why not this? I’m told that “Kindergarten Cop,” the hit Ivan Reitman movie starring Arnold Schwarzenegger, is on deck for a remake. The new film comes from Universal’s 1440 division, which typically remakes old movies into sequels for VOD. This one may be a stalking horse for a TV series of some kind, too.

The new film will be directed by Michael Don Paul (“The Island”) from a script by David H. Steinberg, who wrote “American Pie.” The new Kindergarten cop is a leading man type with an Indian sidekick named Sanjit. They’re on the trail of a missing flash drive from the Federal Witness protection program. Somehow it’s wound up in a kindergarten class. Flimsy premise, but it puts him side by side with a beautiful teacher and they hit it off. There’s also bad guys involved– this time they’re Albanian.

I’m told producers are looking for cross over names from TV. Since they’ve had so much fun doing a Lifetime movie, maybe Will Ferrell and Kristin Wiig can try this next!