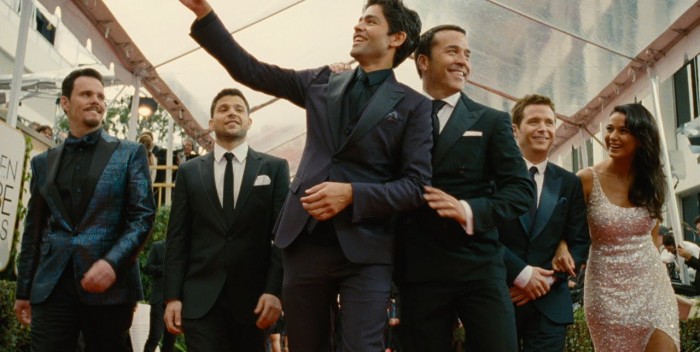 Of all the cameos (and there are many) in “Entourage: The Movie” none is more dismaying seeing Matt Lauer and Natalie Morales of the “Today” show shilling for the Golden Globes. The movie has a big plug for the wacky awards show, and Matt and Natalie supposedly work for the Hollywood Foreign Press.

But maybe that’s what “Entourage” is all about. The movie based on the long running TV Series is a hoot, lots of fun, a breeze that almost really requires a gin and tonic (or two), feet up. It’s too bad every movie theater can’t deliver that.

Last night’s screening at the Paris Theater followed by a very “Entourage” like loud party at Lavo was just the beginning of the promo push. Next Monday there’s a real red carpet big deal premiere in Hollywood. On Tuesday night, director Doug Ellin showed the movie in his hometown of Greenwich, Connecticut at their film festival.

We did have the main cast– Jeremy Piven, Adrien Grenier, Kevin Dillon, Kevin Connolly and Jerry Ferrara. And we also had a couple of guests— “Friends” star David Schwimmer and New York actor Joey Slotnick. But mostly it was a “friends and family” screening for the cast and crew, most of whom come from Queens and its environs. They ate the movie up like it was a chicken parm sub from Don Peppe’s. (We actually got one in the gift bag. Yum!)

“Entourage” picks up a short time after the TV series ended. But just in case you have no idea what’s going, Ellin does a quick recap explaining how Vincent Chase was discovered in a Mentos commercial by peripatetic agent Ari Gold. Chase came to Hollywood with his best pals including Eric Murphy (“E”) now his manager, half brother Johnny (“Drama”) a never made it TV actor, and Turtle (their driver who’s made a fortune with a Tequila brand.

The story is based on real life ups and downs of Mark Wahlberg, who produced the series and the movie, and makes a cameo in the film with his own crew. (Think of it– Johnny Drama is Donnie Wahlberg, now a hit on “Blue Bloods” after working hard forever.)

There were a lot of crews, posses, and entourages at the show last night– so many that it was hard to differentiate between fact and fiction.

As for the movie, it’s everything you’d want and more. With a bigger budget, Ellin was able to throw in a mix of celebrities, real actors, and has beens: Rhonda Rousey, Kelsey Grammer, David Faustino, Chad Lowe– like where has he been?, Mike Tyson, Armie Hammer, Liam Neeson, Billy Bob Thornton, Andrew Dice Clay and so on. Even Warren Buffet has lines.

Some of this works and some doesn’t. Emily Ratajkowski, the model from Robin Thicke’s “Blurred Lines,” is very attractive. But she can’t act. Imagine if someone who could had played Vince’s sexy girlfriend who is pivotal to the plot.

But the pleasant surprise is the return of child star Haley Joel Osment, now an adult, in an equally pivotal role that does work. He’s kind of a mess aesthetically, but he’s really an actor. It will be interesting to see if he can parlay this into character work. He’s very good.

The main cast hums along. Jeremy Piven’s Ari never gets old, Emmanuelle Chriqui is very welcome as Sloan, Eric’s girl friend. Dillon is a hilarious buffoon, as usual, and Grenier is the calm, cool center as Vince, the Leo DiCaprio of the gang.

More next week, but for now, I do think “Entourage” could be a sleeper. It’s just totally enjoyable.