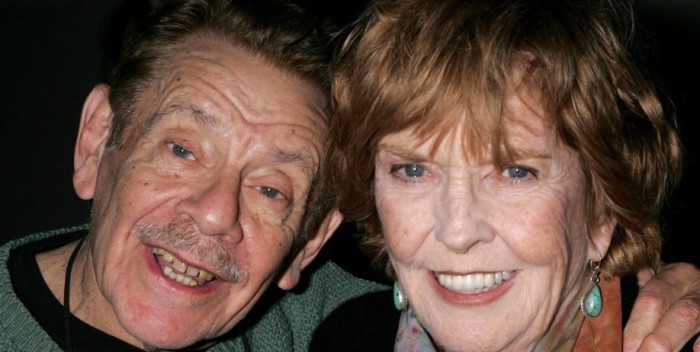 Anne Meara died today at age 85. She’d been living in the Hebrew Home for the Aged in Riverdale for some time, after a serious stroke a couple of years ago. She was the other half of the celebrated comedy team Stiller and Meara with husband Jerry; they were an absolutely brilliant and legendary. Meara was also a gifted playwright and director, as well as writer of Stiller and Meara’s many beloved (and kooky) commercials. She leaves her son Ben, the actor, and daughter Amy, who’d been taking care of her on a daily basis according to sources.

Here they are from the Ed Sullivan show, where they were the contemporaries of Joan Rivers, Alan King and so many legends:

Their Blue Nun radio commercials are burned into my head:

Here they are from “What’s My Line”:

Jerry Stiller, of course, is still alive. During more recent years he became famous in a whole new way thanks to “Seinfeld,” where played George Costanza’s father, and “The King of Queens.” But before that Anne Meara had countless roles in TV and film including playing a pal of “Rhoda” and “Archie Bunker,” appearing in key movies like “Lovers and Others Strangers,” “The Out of Towners” and “Fame.”

She also wrote a hit off Broadway play titled “After-Play.” Vincent Canby, in The New York Times, wrote that it was “the perfect New York comedy to attend before going out to dine with dear old friends from Los Angeles.”

I was lucky enough to know Anne; we talked a lot over the years. She was so funny, and had such a big heart. She was one of a kind. This is one of those times when you saw someone will be sorely missed, and it’s really true. Condolences to her family and friends.