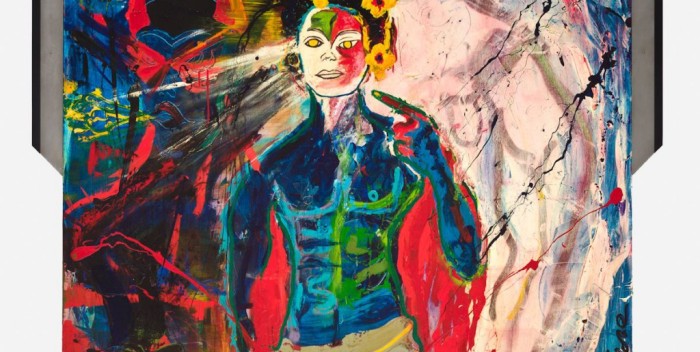 Here’s the report from Cannes, where I am not in attendance this year but hearing a lot from everyone: Sharon Stone will not be at Thursday’s amFAR annual snake dance for Eurotrash in Antibes. Stone has an on again, off again relationship with the amFARians.

This year, her absence is explained by a movie shoot in Los Angeles for a film called “Mother’s Day,” a series of vignettes with Susan Sarandon, Laura Dern, and Christina Ricci. I’m told Natalie Portman was supposed to take her place at the auction podium, but she probably won’t stay as long as Thursday because her film didn’t get great reviews. Cate Blanchett may be persuaded to participate as her film, “Carol,” opens tonight.

Tonight in Nice, at the Modern Art museum, there will be an exhibition of paintings by noted artist Sylvester Stallone, followed by a VIP dinner.Among his works are this featured interpretation of Michael Jackson.

Last night, Stallone skipped the annual dinner at the Eden Roc (Hotel du Cap) hosted by man for all seasons Charles Finch. Stallone dined downstairs at Eden Roc, while a bevy of stars who are in town chowed down including Portman and Naomi Watts.

So far, only the Woody Allen movie has impressed the English speaking crowd on the Croissette. Gus van Sant’s movie was booed, and Natalie Portman’s was met with indifference. Todd Haynes’s “Carol” is going to be big tonight, and there’s hopeful talk of Denis Villeneuve’s “Sicario” with Emily Blunt, Josh Brolin, and Benicio del Toro. Hope springs eternal at Cannes.
UPDATE: Natalie Portman’s publicist says she can’t stay away from her child so long, her movie has premiered and she must go home.