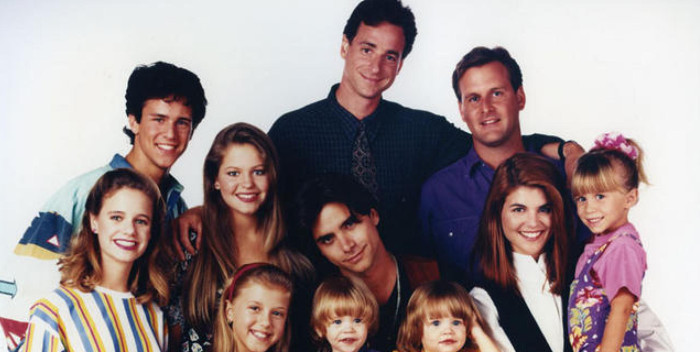 As you must have heard, Netflix is rebooting the totally awful 90s series “Full House.” Bob Saget and John Stamos, along with Dave Coulier, Lori Loughlin and Kirk Cameron’s sister starred alongside the Olsen twins– now kinda grown. The Olsens played one little girl, alternately. The show was terrible and is an embarrassment to watch now. But the reboot has been treated as if it were “The Mary Tyler Moore Show.”

Anyway, there will be children since that’s what it’s about. I was read these descriptions yesterday. Here is what the producers want. Sounds like Cameron’s sister is a widow with two kids. Remember, last week they were searching for a Saget-like character with a “New York personality” and a “big nose.” In other words, a Jewish looking, sounding kid. I do hope Saget returns and tells all the kids “The Aristocrats” joke.

They should also just say there were always twins so both of the Olsens can be on, although it might be funnier to just have them alternate episodes again and we can guess which one is dating the older French guy and which one took the call from Heath Ledger’s trainer when he was dead. Netflix is the perfect network for all that.

“JD” (JESSE DANIEL) is 12-13 years old – Just like his blue collar fireman Dad, JD is tough, athletic, strong-willed. He
idolized his father and is not adjusting well to losing him. JD is always testing limits, breaking the rules and questioning authority. A handsome kid and already a ladies’ man, juggling three girlfriends. He plays
guitar, sings, and loves to ride a dirt bike like his Uncle Jesse (Stamos).

JD is trying to toughen up his geeky little brother Max. He resents DJ constantly pushing him to read, do charity
work, and behave himself…

MAX is 6-7 years old. Max is hyper, goofy, awkward, andkinda geeky. Much like his Grandpa Danny (Saget), he takes tremendous pride in keeping his room tidy, his shirt tucked in, and has already mastered the art of hospital corners. Max is smart, curious about the world, and lovestechnology, computers, gadgets — and money. He sings out of tune,  dances has no rhythm. Max looks up to his older brother, and is always searching for his approval…

RAMONA is 12-13 years old. Ramona is bi-racial, passionate, sharp-tongued, tough, kooky, a drama queen. Ramona considers herself Latina and has fully embraced her Latin heritage even though she is half-white. Living with the
white-bread Tanners is totally lame. Ramona is bright, but not into school. She’s obsessed with her friends, boys, fashion, being cool, social media and taking pics every second of every day. Ramona worships her Dad, but
resents Mom for breaking up the family, even though Dad is a troublemaker. She is experiencing the trials and
tribulations of being a teenage girl, and the mood swings that come along as a result.