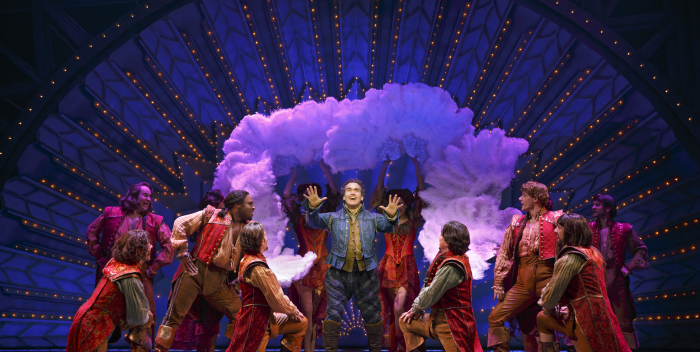 I haven’t had such a good, silly time at the theater since “Spamalot” or maybe “The Producers” as I did last night at “Something Rotten.” The new musical is possibly the Best Musical Tony winner and definitely a strong nominee after its opening last night at the St. James Theater.

The show had a massive spontaneous standing ovation in the middle of the first act, and another almost as good one in the second. This is not usual at all. “Something Rotten” is an absolutely hilarious parody of Shakespeare, not to mention a send up of Broadway in the manner of “Forbidden Broadway” if performed by Monty Python and written by Mel Brooks. What more do you want?

The cast is absolutely a knockout. Brian d’Arcy James, John Cariani, the insanely talented Christian Borle, and Brad Oscar, Kate Reinders, Heidi Blickenstaff, Peter Bartlett– all of them so good that there aren’t enough Tony slots for them. Brooks Ashmanskas nearly steals the show as a puritanical minister with nothing pure on his mind.

The show is written by Broadway novices, grown men who must never stop laughing– brothers Karey and Wayne Kirkpatrick, who are American and live in L.A. and Nashville, and British humorist and writer John O’Farrell. Wayne, based in Nashville, is a hit songwriter whose credits include one of my favorite songs, “Change the World,” by Eric Clapton.

Think of this– Christian Borle, who’s a Broadway star, is third billed in this show. That’s how good it all is. John Cariani is a long over due overnight sensation here. But it’s Brian d’Arcy James who holds the whole madness together– and it is madness– leading this insane group. Bravo to him. And Best Actor in a Musical nods everywhere.

Set in 1595, this is more or less the story– d’Arcy James and Cariani are Shakespeare’s (Borle) rivals as playwrighting brothers Nick and Nigel Bottom. Shakespeare is far more successful, a rock star in South London. Nick Bottom consults a soothsayer named Nostradamus (Brad Oscar) to figure out what Shakespeare’s biggest hit will be, so he, Nick, can write it first. Nostradamus kind of gets it right and wrong, resulting in Nick writing “Omelette: The Musical” instead of “Hamlet.” Nostradamus, you see, gets the breakfast part right– something about Danish.

Midway through Act 1, Nick has to explain to Nigel that they’re also writing the first musical ever. The resulting number, sort of their “Springtime for Hitler,” takes the house at the St. James down.

“Something Rotten” leads the list of my choices for Best Musical nominees, followed by “An American in Paris,” “The Last Ship,” “Finding Neverland,” and “Fun Home.” Of all the shows, my favorite score was from “The Last Ship.” But all the shows, including “Doctor Zhivago,” had excellent songs. “Fun Home” was the most intricate instrumentally, if not so hummable. “Something Rotten” is just hilarious. “An American in Paris”? A sublime production of a never before staged musical, but the Gershwin songs are too familiar to be considered ‘new’– it’s a little unfair.