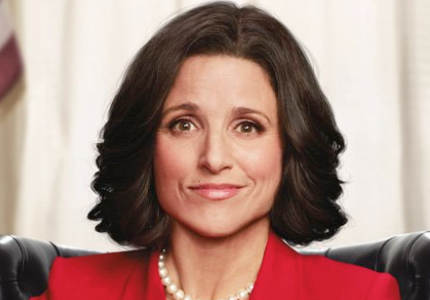 Exclusive: Don’t count Julia Louis Dreyfus in for the US film version of “Force Majeure” so fast. JLD told me last night she’s taking six months off, starting now, from any work in Hollywood at all. What about the movie? “Uhn’t uh, I’m not doing anything. I’ve got to spend time with my family.” She means it, too, because her very nice husband Brad Hall and their two grown sons were with her last night at HBO’s splashy premiere of Julia’s hit show “Veep.” (It’s back on HBO April 12 at 10:30pm. Yay!)

Julia is one of those rare nice people you meet in the TV world. She talks to everyone, is lovely, funny, and keeps her cool. She was right at home last night at Gotham Hall with “Veep” cast members, friends of the show, and of HBO, all of which there were many. It doesn’t hurt that the first two episodes of “Veep” are LOL hilarious in their usual, sublime way. JLD’s Selina is now, improbably, President of the United States. What could be funnier?

A big part of this season is a mystery. Hugh Laurie joins the cast, but no one will say what his role is. Speculation has him as Vice President. It does feel like the new Veep is not long for this post, so anything is possible. Meanwhile, a more fleshed out role is Selina’s daughter, Katherine, played by Sarah Sutherland (grand-daughter of Donald, daughter of Kiefer). In the second episode, Katherine has to deal with being subjected to a popularity poll. It’s not pretty.

At the party last night, making rare East Coast appearances: Gary Cole, Kevin Dunn, Timothy Simons, Matt Walsh and the glowing Anna Chlumsky, who’s about to open on Broadway in “Living on Love” with opera star Renee Fleming in a non singing role. Famously, Anna starred with Macaulay Culkin in the movie “My Girl” twenty years ago. Does she talk to him now? “No!” she said, laughing but not meanly. “Do you talk to anyone you knew when you were 12?” She’s got a point.

As for JLD: does she ever watch the old “Seinfeld” episodes, I asked? She hesitated. “A little, sometimes. It’s like watching yourself grow up on TV.” I told her my favorite episode is “The Yada Yada” aka “The Anti Dentite” in which also Bryan Cranston plays Dr. Tim Watley, the dentist who wants to be Jewish for the jokes. “And I was very pregnant with that six foot five kid you just met,” she said, pointing to her 17 year old son. “You wouldn’t believe it,” she said. (And you wouldn’t because she looks mostly the same as she did 20 years ago.)

PS Guests at the party included Katie Couric, Pablo Schreiber, “Empire” writer and “Girls” actor Danny Strong, HBO’s West Coast chief and style impresaria Nancy Lesser, and “Boardwalk Empire” creator Terry Winter. Everyone was very excited to welcome famed Four Seasons Hotel manager Mehdi Eftekari to New York from Beverly Hills. Mehdi is one of the most popular and coolest Angelenos– he’s going to make the Four Seasons here the in spot! Also great to see my old pal Tammy Haddad, media queen of Washington DC. I knew her when she produced Larry King’s show from the capital. She was 6 and I was 8. Precocious!

More on “Veep” right before it premieres…