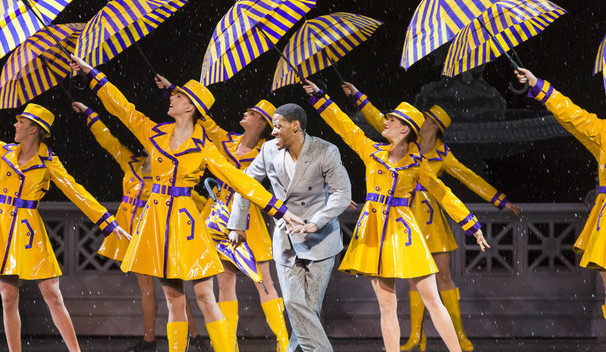 You want bang for your buck? We got it last night at the opening of Radio City’s Spring Spectacular starring Laura Benanti, Derek Hough, Lenny Wolpe, and the Rockettes. Wow. In a word, wow. This is not supposed to be Sondheim, or even a subtle Broadway musical. It’s called a “spectacular” for a reason. It’s for tourists, and it’s for families. It’s supposed to be big and brassy, outsized in every way. You were looking for “Into the Woods”? It’s not here.

The Spectacular is just that: set after set of huge pieces that fill Radio City’s block long stage. Grand Central, the Empire State Building, Central Park, Yankee Stadium, the main Library, Times Square, the Metropolitan Museum– complete with paintings and the outside fountain– all the New York icons are reproduced sort of stunningly, with 3D effects and amazing videography.

The show is purposely interactive and ornamented with references to things kid will understand while at the same time occasionally wink-winking to the parents. The story is simple and convoluted at the same time. Derek Hough (known to all from “Dancing with the Stars”) is an Angel sent to Earth to stop billionaire businesswoman Jenna– played by Broadway and “Nashville” favorite Laura Benanti– from turning the city into a digital ruin.

Also involved in this is Bernie, played lovingly by Lenny Wolpe. He’s sold his tour company to Jenna, who plans to make him into an avatar.  He’s going to convince her not to do all these terrible things by showing her the sights of New York. There’s a nod to Easter, but this show is the “Spring Spectacular,” not the Easter show. Still, the Easter segment is grand.

This is a HUGE show by all means. Many millions have spent on the technical stuff, particularly life like robotics that are kind of jaw dropping. Tina Fey and Amy Poehler voice the lions that sit outside of the 42nd St. library. They, like some others I won’t reveal, are just great.

As for the actors: Laura Benanti can do anything. She’s beautiful, smart, has the most enchanting voice, and even dances. You almost wish she were in a “real” Broadway musical, but this will do. She lights up the stage. Derek Hough is a capable dancer, with a big following. Acting is not his strong suit, but he’s not required to do a lot of that. Lenny Wolpe makes up for that as Bernie. He’s so ingratiating you almost want him to end up with Jenna. And then there’s tap dancing great Jared Grimes, who’s worth almost the whole ticket. Keep your eye on him.

Is this theater? In a way. It’s entertainment. That’s all the Radio City shows are supposed to be. In that it succeeds. Harvey Weinstein stepped into produce the show this year when Cablevision’s Jim Dolan asked for help. I think they’ve come up with a winner. And when the story arrives in Times Square, it’s pretty clever how they’ve positioned some sponsors, and Weinstein’s “Finding Neverland” on the set as product plugs. This is not, let us remember, a charity.