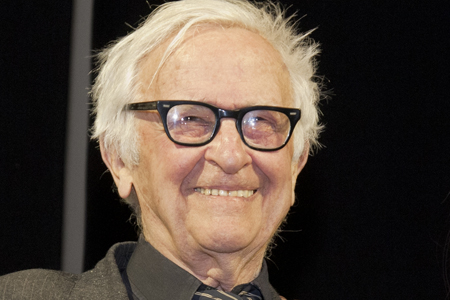 I am sad to say that Al Maysles has died at the age of 88. With his brother David he directed “Grey Gardens,” one of the most famous docs of all time. With DA Pennebaker, Richard Leacock and Bob Drew he made countless other films, worked with the Rolling Stones on several legendary projects. I was lucky enough to call him my friend, as well. He was a sweet sweet fellow with a real air of mischief right up to the end.

I know that 88 seems old, but Al never ever seemed old. He wanted to be right in the thick of everything, at the center, in the middle of the action. Pennebaker told me just now: “We spent four months in Moscow making a film in 1960. And the thing about Al was, he was a great watcher. And that’s really 90% of the whole thing, you know?” The two old friends recently spent a day together watching “Moscow” and reminiscing.

Believe it or not, Al has a new movie coming out soon. “Iris” played at the New York Film Festival last to great acclaim. It’s all about style icon Iris Apfel. But the real icon today is Al, whose crazy tangle of white hair and wide, happy grin will live in my memory forever.