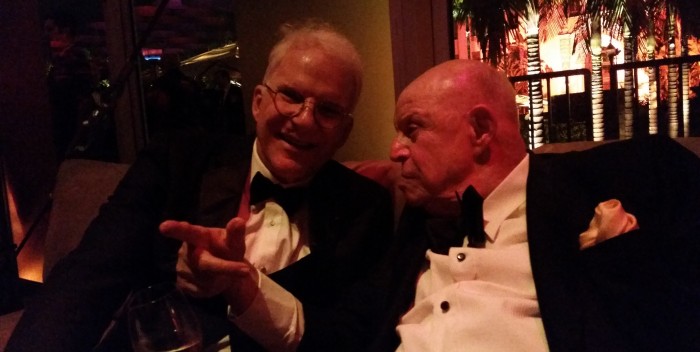 Vanity Fair 2015: you know that Vanity Fair’s annual all star party always features a small round room composed of banquettes where stars set up shop to meet and greet. And last night the round room got really interesting because Lady Gaga– who’d just had the performance of a lifetime on the Oscars– was four booth away from Beyonce and Jay Z.

The homecoming couple was entertaining Kevin Hart, who is much shorter than anyone can imagine, but overcomes it with hilarity. The oddest moment was when John Travolta and Kelly Preston, with daughter Ella Blue, just sort of moved in on Bey and Jay to introduce themselves. The Carters — each dressed in white– did not stand up or shake hands. They looked mesmerized.

My favorite moment in the whole wild Vanity Fair party — it really was the incredible scene of hundreds of famous people mostly standing in the humungous, long and wide main room, all eating In and Out burgers– was Steve Martin coming over to say hello to Don Rickles, age 88. I’d been sitting on one of the couches on the periphery, with Rickles and his wife, talking about his long friendship with Bob Newhart, his upcoming tour and why he doesn’t play a few nights in New York. Out of nowhere comes Steve Martin, grinning from ear to ear. He sits down with Rickles, and the two fall into a comedy reverie. We know Rickles is a genius, and a legend.

What makes Martin so smart is that he’s a great student and an ardent admirer. So Rickles just carries on hysterically, as if de-aged by 20 years as Martin laughs and laughs. Over the din of the room I did hear Rickles crack at Martin, “What the fuck is wrong with you?” And they both cracked up. I took the picture here, and then Kevin Mazur came over and snapped a few that you will probably see in VF. I did also chat with Martin’s wife, who’s absolutely lovely. Mrs. Rickles, by the way, should write a book. She’s seen it all. They have been married, she told me, for 50 years. Don also told me how much he missed Joan Rivers.

The first person I saw when I arrived was the gorgeous Patricia Clarkson, who just finished her Broadway run with Bradley Cooper and Alessandra Nivola in “The Elephant Man.” They will all get Tony nominations. And then it was just one after the other. Julianne Moore was also set up in the round room, and she was literally glowing from within. She said, “I can’t believe it. It’s been the best year of my life, starting with Cannes and now all this.” Her husband, Bart Freundlich, was with her, as well as Mark Ruffalo’s wife, and producer Christine Vachon who’s been instrumental in Julie’s career.

Back in the main room, Common was holding his Oscar for “Glory,” talking about future collabs with John Legend- who the Oscar announcer kept calling by his real name, John Stephens, and confusing everyone. Shirley MacLaine was hanging out with “Foxcatcher” director Bennett Miller– she looks sort of amazing abd and better than ever. She has not seen one minute of brother Warren Beatty’s still cooking in the editing room new movie!

Maybe it was the rain, or maybe it was because Madonna wasn’t going to be at her own after party, but people stayed and stayed at Vanity Fair. Around midnight there was a second wave of new guests, including Elton John and David Furnish, who’d just arrived after Elton played keyboards with Nile Rodgers and Chic over at his AIDS Foundation dinner. (It was a spectacular occasion!)

There were plenty of surprises. Even though Oprah had been at the Oscars with Gayle King, she came to the party with boyfriend Stedman Graham. Mike Myers did a rare turn. A lot of the great actors/nominees from last year were there, too including Lupita Nyong’o, Idris Elba, and Chiwetel Ejiofor. They’re all back this coming year with new movies.