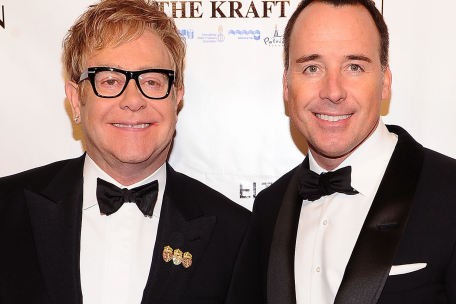 Oscar weekend began last night with a bang: while the LAPD Bomb Squad found nothing down at Hollywood and Highland, there were explosions of a different sort all over town. At the annual Gagosian Gallery opening– this year for artist John Currin‘s luscious nudes– the stars poured in. Leonardo DiCaprio came with his mom and a bunch of friends. Elton John and David Furnish did a through the massive gallery space. Mick Jagger arrived with his business partner Victoria Pearman.

That was a lot of star power in one room! And believe it or not, none of them talked to each other. Leo and Mick in particular passed like ships in the day– the room is brightly lit. Mick did stop and study each painting very carefully, Leo admired them more casually. There were plenty of other celebs and a performance artist who was dressed like Jesus. DiCaprio sported a wiry beard, and told me that shooting “The Revenant” in Calgary is very very cold, but maybe not as cold as New York! His mom Irmelin, who’s a peach, was celebrating her 70th birthday.

Over at the Beverly Hilton, Ewan McGregor and another boatload of stars were on hand for the 2nd annual Unite4Humanity, sponsored by Variety. Halle Berry, Queen Latifah, Jeff Bridges, Aaron Paul and William H. Macy were among them, and everyone spoke to each other.

There were many other parties, I’m sure, but over at the excruciatingly hip Sunset Tower Hotel, writer director Paul Haggis was having his annual dominoes tournament — in black tie– for Artists for Peace and Justice. They raise money for Haiti. Aloe Blacc sang, Oscar nominee Patricia Arquette led the red carpet congo that included Adrien Brody, Russell Simmons,, Clifton Collins Jr. and bevvies of beauties.

What was going on in the Sunset Tower dining room? This is one of the most exclusive eateries in town. On Wednesday night, George Clooney and wife Amal were there, along with Michael Keaton. Last night: Mark Consuelos and Kelly Ripa— tied for nicest celebs with Elton and David–shared a table with Jimmy Kimmel; Bill Murray corralled director Wes Anderson, and actress Kelly Lynch with her director husband Mitch Glazer; Lee Daniels rolled through the room for a meet and greet; the great Rose McGowan and her 100 watt smile joined a table of pals, and Lawrence O’Donnell gave the joint an air of respectability.

Key words over heard in the air everywhere: Boyhood, Birdman, Will American Sniper pull off a surprise on Sunday night, and secret admissions of voting for The Imitation Game.