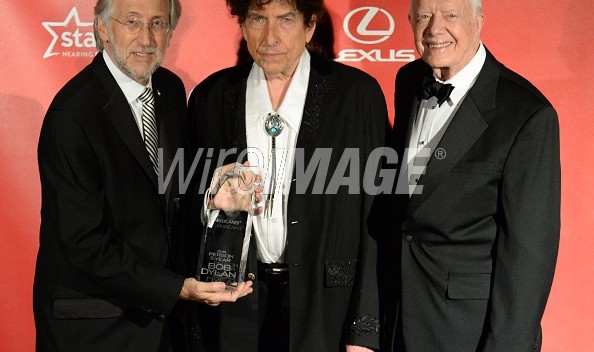 Bob Dylan looked like the most miserable bar mitzvah boy in history last night as he received the MusiCares Person of the Year Award. A dozen or more famous musicians performed his songs for a tony crowd of movie and TV stars and music execs, but Dylan refused to join in at the end. Most MusiCares honorees– like last year’s Carole King, Paul McCartney, or Neil Young, Sting, Bruce Springsteen, Bono– generally come out and give the audience a few numbers. Not Dylan. My spies say he barely sat in the ballroom at the LA Convention Center through a night that included performances by Springsteen, Crosby Stills & Nash, Jackson Browne, Bonnie Raitt, Sheryl Crow and others.

But Dylan did speak. He gave a 20 minute acceptance speech in which he thanked a bunch of different acts for covering his music and making him rich. They included the Byrds, Sonny & Cher, Joan Baez, Jimi Hendrix, the Turtles, Peter Paul & Mary, Johnny Cash, Sonny & Cher, and the Staples Singers. Of a few he said: “They made some of my songs top-10 hits. But I wasn’t a pop songwriter. I never even wanted to be that. But it was good that it happened. Their versions of songs were like commercials. I didn’t really mind that. Because 50 years later my songs would be used for commercials. So that was good, too. I was glad it happened.”

Dylan took pot shots at lots of other artists, and even got a jab in at late Atlantic Records founder Ahmet Ertegun:

“Ahmet Ertegun didn’t think much of my songs, but Sam Phillips did. Ahmet founded Atlantic Records. He produced great records: Ray Charles, Ray Brown, LaVern Baker, just to name a few. There were some great records there. No question about it. But Sam Phillips, he recorded Elvis and Jerry Lee, Carl Perkins and Johnny Cash, radical artists that shook the very essence of humanity. Revolution and style and scope, every shape and color. Radical to the bone. Songs that cut you to the bone. Renegades in all degrees. Doing songs that would never decay and still resound to this day. Oh, yeah. I would rather have Sam Phillips’ blessing any day.”

Dylan grimaced through every photograph, most of them taken with NARAS president Neil Portnow and real US former president Jimmy Carter.

Some people, like Ringo Starr, who didn’t perform, enjoyed the night more than Dylan.