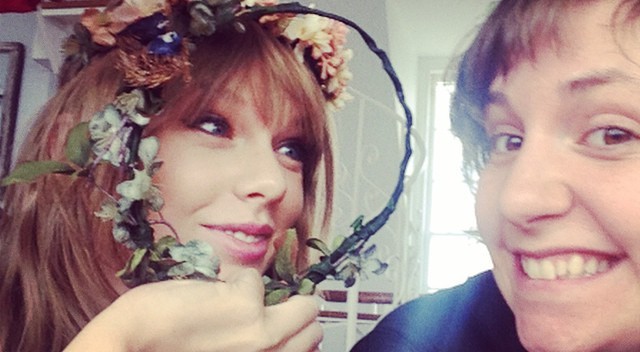 Taylor Swift caused quite a commotion last night when she swept into the HBO Golden Globe after party with Selena Gomez and Lorde in tow. Taylor came to see her pal Lena Dunham and the girls from “Girls.” (Lena’s boyfriend Jack Antonoff, from the duo called Fun, co wrote Taylor’s big hit “Out of the Woods.”) What a scene!

The three pop divettes had a bevy of bodyguards but still managed to attract a bunch of appropriate young guys including hot young actor-musician Nat Wolff (The Fault in our Stars). Taylor and I talked about my debate with her pal Cara de Lavigne  over which of her other hits– “Blank Space” or “Shake it Off”– will last longest. (I said, Shake it Off, Cara claims Blank Space.)

Selena, who’s getting ready to shoot a new movie, took selfies with everyone including yours truly. She took the picture. we talked about the nature of her very well produced and written singles “I Love You Like a Love Song” and “The Heart Wants What it Wants.” She’s the first to acknowledge that there’s a very talented team behind her.

Later, I watched a second collision of celebs at the Weinstein Company party when Harvey Weinstein orchestrated a meeting between Swift, her crew, and Jennifer Lopez and Benny Medina. There were lots of famous actors in the room including newly minted Globes winner Amy Adams. But the flashbulbs were bursting on this one.

At the HBO party it wasn’t the Divettes and the Girls– Dunham, Allison Williams, Zosia Mamet (with boyfriend Evan Jongkeit), and Jemima Kirke– were the only stars. Oh no, not by a long shot. Joel Coen and Frances McDormand were there with son Pedro, Julia Louis Dreyfus and Brad Hall weren’t far behind. Matthew McConaughey and wife Camilla Alves took a table not too far away, and Clive Owen was all smiles taking pictures with fans.

I did tell Julia Louis Dreyfus that as far as I’m concerned, she won (she actually lost) Best Actress in a Comedy. The Hollywood Foreign Press was just being contrary. “Veep” is the best show on TV. (The show that did win, “Transparent,” isn’t actually on TV. But it’s on Amazon Prime, so I will try it. That’s what I told Amazon founder Jeff Bezos when I saw with him and his lovely wife for a bit of the show. He then “borrowed” a black Bic Pen, which I’d bought on Amazon in the first place. I didn’t get it back, but luckily had more of them thanks to same day service!)

There was much talk of the irony of Coen’s “Fargo” TV version (he’s not involved in it) beating McDormand’s highly praised “Olive Kitteridge.” McDormand won the Oscar for the “Fargo” movie, you may recall. Fran McDormand is hilariously deadpan in real life. “I don’t like it at all, that’s what I say,” she said to me.

I ran into Nia Vardalos and husband actor Ian Gomez (so good in “Cougar Town”). Nia told me she’s turned in her script to producers Tom Hanks and Rita Wilson for the sequel to “My Big Fat Greek Wedding.” “It took me four years,” she said, adding that the Hankses “love it.” John Corbett and the rest of the original cast will return.

PS Katie Holmes, who’s never looked better, told me she’s still got her place in New York but it’s “just easier” for Suri to go to school in suburban L.A. “It’s a little intense for her in New York,” Katie said.