Cocker’s version of “With A Little Help From My Friends” was recorded in Spring 1968. It was his own arrangement. Guitar on it was by Joe’s old pal (from back in 1964) Jimmy Page. Also on the track B. J. Wilson (drummer of Procol Harum).

The ad featuring Ringo appeared in all the UK consumer weekly music papers. NME, Melody Maker, Disc, Record Mirror. It was an immediate hit in UK. Went to #1. Was released by A&M in USA. The ad was used in Billboard. Alas the single was not a hit.

But then Joe appeared at Woodstock in 1969 – and America discovered Joe Cocker.”

Here’s the ad, thanks to Martin. Click on it to make it bigger. Reproductions are prohibited: 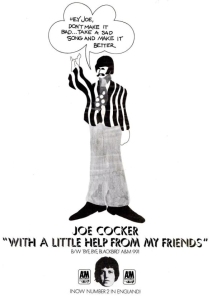 “I was especially pleased when he decided to cover With A Little Help From My Friends and I remember him and [producer] Denny Cordell coming round to the studio in Savile Row and playing me what they’d recorded and it was just mind-blowing, totally turned the song into a soul anthem and I was forever grateful for him for doing that.”

“Goodbye and God bless to Joe Cocker from one of his friends peace and love. R.”