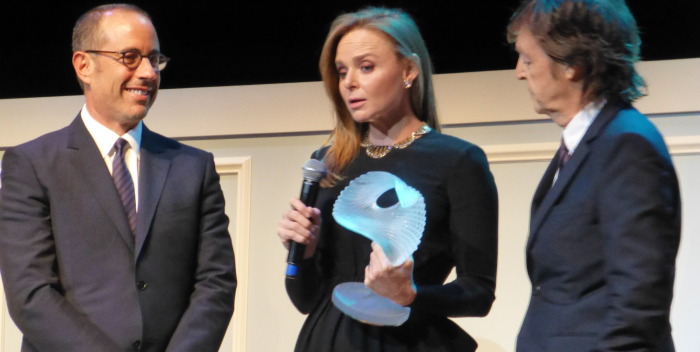 It was a wild New York night at Alice Tully Hall for Lincoln Center’s second annual Corporate Fund gala: designer Stella McCartney was honored with a Q&A by Jerry Seinfeld that she never could have expected, followed by a swanky dinner with vegetarian menu and lots and lots of stars. It was also a weirdly warm Beatles semi-reunion that had Yoko Ono getting hugs and kisses from Paul and Nancy McCartney, Olivia Harrison and her son Dhani, as well as Stella.

And then a surprise of Dhani Harrison, son of George and Olivia, performing “Love of My Life,” an Everly Brothers song (Stella’s favorite) as well as rocking “Live and Let Die” with his band, for an audience that included a five months pregnant Liv Tyler, plus Woody Harrelson, Lorne Michaels, Seth Meyers, a very pregnant Alicia Keys, actor Luke Evans, famed artist Jeff Koons, as well as Paul’s in-laws John and Jodie Eastman, rock jewelry designer Loree Rodkin, Helena Christensen, and a hilarious Chelsea Handler, who emceed the evening until she had to leave to take a plane to  Australia.

Handler exited the show as irreverently as she could by making a joke about Paul McCartney’s infamously unpopular second wife: “I would say a break a leg but I don’t want to insult Heather Mills.”

Legendary (and rocking, believe me) Harpers Bazaar editor in chief Glenda Bailey and Hearst president Steve Swartz (who’s president of the Fund)  put together this amazing group of people.

Meantime, the sublimely funny  Jerry Seinfeld– assigned to interview Stella on stage for about a half hour– brought the silly.  Seinfeld asked Stella a series of non sequitur questions including “What do you wear when you feel bad?” and “Why do most  people look disgusting?” McCartney was up to the challenge though and gave him as good as he got. When Jerry asked her “Why do people come to my shows at Caesar’s Palace wearing tank tops, flip flops and shorts?” Stella volleyed back: “Because they’re your shows!”

Finally Jerry observed that Stella does not use leather or fur in her clothing. He said. “I eat only leather and fur.”

Video tributes were shown from Quincy Jones, Bono, Gwen Stefani, Chrissie Hynde, Kate Winslet–and of all people a bright and brisk sounding 90 year old Doris Day who praised Stella for her work in animal rights. That was quite a coup!

Dhani Harrison summed up the tone for the whole night. On stage he said he there “to honor my big sister.” Afterwards he told, “Stella has looked out for me my whole life.” You know, just the idea that Paul McCartney’s daughter has done that for George Harrison’s son– the two Beatles met when they were 15, in 1957–makes you believe in the magic of the Beatles. Aw shucks!

The evening, which looks like it will become an annual tradition, was put together by Harper’s Bazaar rocking editor in chief Glenda Bailey and Hearst mags’ Steve Swartz. I think even they were surprised how well it worked out!