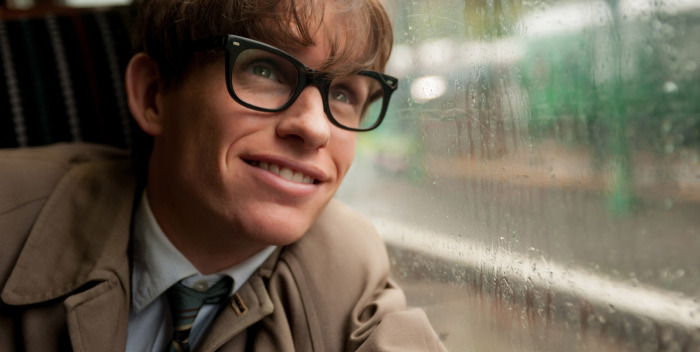 World renown scientist and physicist Stephen Hawking, who has suffered from ALS for 50 years, lives a perilous existence. According to the people who’ve made “The Theory of Everything,” an extraordinary film with Oscar-buzzed performances, Hawking “basically dies every couple of years, comes back to life, and goes back to work.”

McCarten, Redmayne, and Jones all spent a lot of time with Hawking and with first wife Jane, who wrote the book. They are deeply well versed in Hawking and his life long illness at this point, and quite articulate about it. Hawking has lived well beyond the two years that was predicted when he was diagnosed in school with ALS. The group says that every two years Hawking winds up in hospital, hooked to machines and nearly dies. “Somehow he comes out of it,” McCarten explained. “And then he talks about going on a lecture tour and back to work.”

One subject raised during the post lunch Q&A: about Hawking’s private life. He fathered children and has had two marriages. “Everything works,” Redmayne assured the diners and went on to explain Hawking’s ALS. “When he met him,” Eddie said, “he was only interested in Felicity. He’s quite the ladies man.”

Redmayne, meanwhile, turns out to be less of a player. He’s getting married in December to, essentially, his high school sweetheart. He and Hannah Bagshawe. She came to the lunch with Redmayne’s terrific parents, from London, and I am happy to report she’s a keeper. After a week long honeymoon over Christmas, Hannah will be at Eddie’s side for a long Oscar campaign. Lucky, lucky guy!

During the lunch, I asked McCarten about Hawking’s public pronouncements that there is no God. “Is there a God?” I asked. Producer Eric Fellner, sitting beside me, didn’t miss a beat. “Peggy Siegal,” he said, naming our host.

PS A Daily News reporter came to lunch at the austere Lotos Club wearing very skimpy shorts and loafers. A huge kerfuffle ensued because the club, rightly, refused his entrance. An overcoat was procured. But really, are these kids raised in space? Mort Zuckerman, buy your reporters some pants, please!