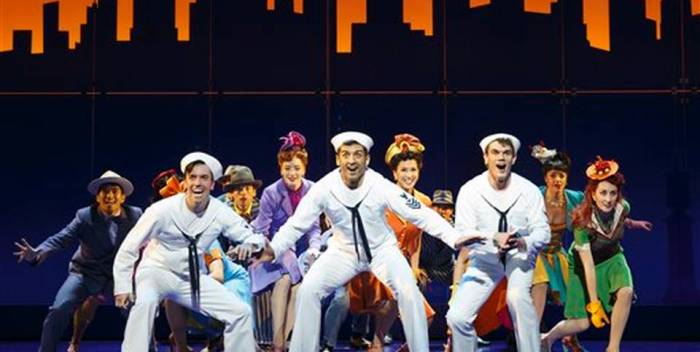 Those words were written by Adolph Green and Betty Comden in 1944 for “On the Town” — music by Leonard Bernstein, choreography by Jerome Robbins. I was a kid when I was taken to the 1971 revival with Green’s famous actress wife Phyllis Newman, Bernadette Peters,  and Donna McKechnie as the three main ladies. Marilyn Cooper, the famous character actress, played kooky Lucy.

Last night, almost 70 years after the first opening, “On the Town” came back. I thought it would be a bit dull and kind of corny at this point– three sailors on leave in New York  for one day during World War II. They’re looking for girls, and they’re pretty naive. Not really for the iPhone- Tinder generation, right?

Wrong. Turns out the new “On the Town” may be the best production ever. Tony Yazbeck, a Broadway veteran under 40, becomes an “overnight” star. He’s a throwback to Gene Kelly, a guy’s guy who sings and dances and is spot on throughout with charm to spare.  All six main actors, plus comic genius Jackie Hoffman in several funny roles, are just wide-grin wonderful. It doesn’t hurt that the music by Bernstein, Comden and Green comes off sensationally. Last night, the conductor, James Moore, got a standing ovation at the start of Act 2. That never happens. Come see this orchestra, live in the pit.

This is the 8th musical John Rando has directed; only “Urinetown” ever really stuck. He makes his mark with “On the Town,”  with Joshua Bergasse adapting Jerome Robbins’ legendary choreography. Yazbeck and Megan Fairchild (in her Broadway debut) are simply dazzling in the ballet sequences, not to mention just about everything else.

In the audience last night was most of the late Adolph Green’s family including his composer daughter Amanda, writer son Adam, and widow Phyllis, now retired, the latter a popular presence still in the Broadway scene. She showed me a button she’d clipped to her handbag with a picture of Adolph. “I’ve brought him with me,” she told me. I asked her, “Weren’t you in this in the 70s?” Phyllis Newman answered, with a wave: “I was, but I wasn’t any good! These people are much better.” That’s not true.

Also on hand: Kristen Chenoweth, Steven and Maureen van Zandt, and the great Phil Smith, head of the Shubert Organization. The Lyric (formerly Foxwoods, where “Spider Man: Turn off the Dark” last lived) isn’t even a Shubert Theater. He just wanted to see the show. I also spotted Joanna Gleason and Chris Sarandon, and “Roky” Musical star Andy Karl and singer wife Orfeh. The big premiere party, down at Capitale on the Bowery, was pretty swanky in the tradition of old Broadway premieres at Roseland. They dressed the place up like a USO show. Not that I would know. I’ve seen them in the movies.