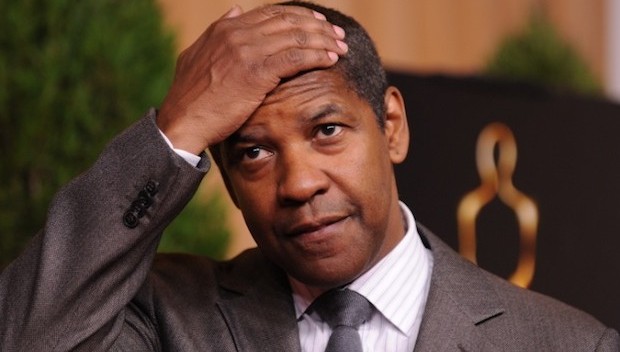 Denzel Washington is over it. He skipped the premiere after party for his own movie, “The Equalizer,” last night at the Stone Rose Lounge. It was like deja vu all over again: he did the exact same thing for “Flight,” same venue, a couple of years ago. Oh well. He had a better invitation, I guess.

Denzel, everyone praised your performance at the party. Ethan Hawke compared you to John Wayne. Just like at the “Flight” party, everyone wanted to say something nice to you. But you weren’t there. Where were you?

“The Equalizer” has little to do with the old TV series. It was shot in Boston, although I don’t know why since you see nothing of the city. Also, the Boston accents are either nil or kinda bad. David Harbour, an excellent actor, tries it and gets it, almost.

The movie’s main villain, played by Martin Csokas, looks oddly like Kevin Spacey, and even sounds like him sometimes. The rest of the cast is hard to follow, but Melissa Leo and Bill Pullman show up in the middle and kind of help explain what’s going on. They could be spun off into their own film.

Denzel does share the name Robert McCall from the TV show. He’s been working at a Home Depot type place, placidly selling sheet rock, until one day a girl he knows slightly from a diner is beaten up her pimp. That’s when Robert decides to kill a lot of people, violently, leaving a trail of bodies and gore. This is because he’s really a good guy who’s righting wrongs against the weak.

The movie is moody and dark, shot like it’s “The Dark Knight.” Some of it is ridiculous, and obvious. It is also humorless to the point of exasperation. But this is a pop corn pleaser, and I suspect “The Equalizer” will be a big hit. Also the use of a Home Depot-style set gives Denzel a chance to avenge himself using nail guns and other interesting hardware store weapons.

There are some Sony product plugs: Denzel has a Vaio computer, which is plausible only because I still have one. But everyone has a Sony cellphone, and that’s a little absurd. Kudos to Fuqua for use of Gladys Knight and the Pips’ “Midnight Train to Georgia” and for reference to the Pips with a video clip.

Theme from the old show by Stewart Copeland, of the Police: