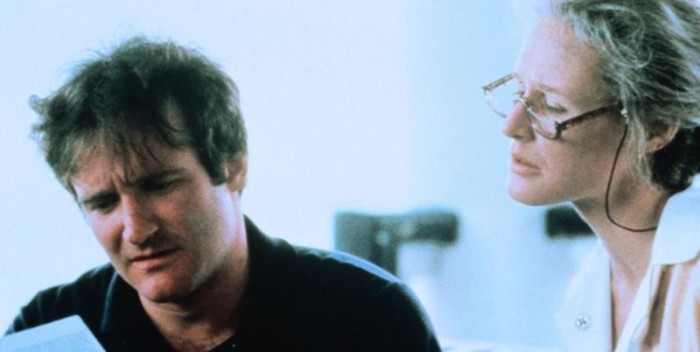 Tony and Oscar nominee Glenn Close posted this yesterday on Facebook. I thought I’d share it with you. Glenn is one the great class acts. She and Robin starred together in George Roy Hill’s film adaptation of John Irving’s great “The World According to Garp.”

Message from Glenn Close:
Robin Williams was my friend. He was the star of the first movie I ever did called The World According To Garp. It was his second feature film and he was wildly popular because of his years in the TV show, Mork and Mindy. George Roy Hill was our director and he believed in Robin’s transcendent talent. I watched as the two of them worked on ridding Robin of all the mannerisms he had taken on while playing a brilliantly funny, spontaneous alien. Robin was seriously determined to become a film actor and George took his desire seriously. It was wonderful to watch.

Robin was incredibly sensitive to the crew, to the people who don’t always get the recognition they deserve for the various jobs they do during a shoot. Robin knew everyone’s name and could always get a laugh—not a laugh aimed at himself, but a laugh that recognized others. He gave various favorite crew members special nicknames. Our camera operator had famously combed-back, black hair that had considerable amounts of product in it, keeping every hair in place in all kinds of weather. Robin dubbed him “Teflon Man” and would do hilarious rifts as an archeologist in the distant future finding “Teflon Man” with his hair still perfect.

Robin was incredibly sensitive and gentle and loving. He was very self-critical. During Garp we had a press conference and I was asked to go along with Robin. I watched this quiet man, who I’d never seen reading a newspaper or magazine or watching TV, explode into the press room and do an amazing turn on all the most current events, people and issues. He wove it all into a cohesive whole with no notes, nothing but his genius. It was breathtaking in its spontaneity and brilliance. Everyone was completely blown away. When we walked out of the room together, Robin turned to me with a worried look and asked in a whisper, “Was that all right?” I gave him a long hug and said, “Yes! You were incredible” He checked to make sure I really meant it and then went to his trailer.

Robin was a world treasure. As we mourn his tragic death, we must remember him for the great waves of laughter that he was able to illicit from us, how his humor and insights–though they came from a place of pain and uncertainty—connected us and reminded us of how flawed and fragile…how human we are…how we are capable of moments of inspired transcendence and others of unspeakable despair. Robin had it all. I am so deeply thankful that this dearly loved man graced this particular planet.