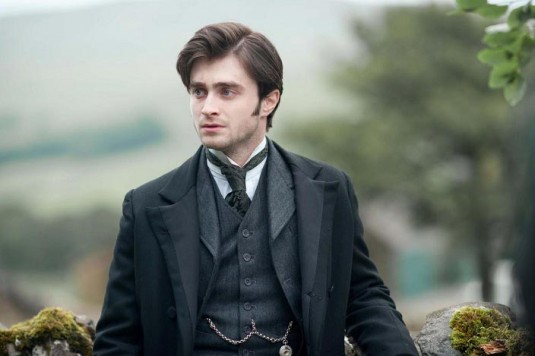 If Daniel Radcliffe were in sports, we’d be worried. Imagine if he had eight Super Bowl or World Series rings in a row, and then couldn’t get a hit or throw for a touchdown at all.

That’s what’s happened since he starred in eight Harry Potter movies that broke all records. He’s been in three clinkers in a row– Woman in Black, Kill Your Darlings, and now What If?, formerly known as The F Word.

The F Word was so bad that last year in Toronto I did something I’ve almost never done in my life: I left. But not before yelling out loud at the screen in a movie theater. There were Daniel and Zoe Kazan, two fine theater actors– yes, Radcliffe has also proved himself a real actor on Broadway three times in a row– discussing blow jobs and the sizes of penises. And using the real F word. “Flee.”

Daniel Radcliffe is lucky. First, thanks to Harry Potter, he’s financially independent. He can afford to take chances. Plus, he’s been very clever by throwing himself into Broadway and getting excellent reviews. He was just lovely in this season’s “Cripple of Inishmaan.” He was brave and winning in “How to Succeed in Business without Really Trying.” He was really brave and naked in “Equus.”

Also, in person, he’s about as nice as a person could be who’s young, talented, rich, and wildly popular. He was really raised right at Hogwart’s.

Radcliffe’s next release is “Horns,” a funny indie that could catch on. It’s the G Word. Good. Then comes “Frankenstein,” and Judd Apatow’s highly anticipated “Trainwreck.” By the time he’s 28, Radcliffe may also have what could be a winner in Doug McGrath’s pic about the man who built the Brooklyn Bridge, John Roebling.

So the future looks bright with possibilities. But today, with “What If” sort of DOA, there are passing clouds.

PS If you’re in New York, you can still see Zoe Kazan off Broadway in “While We Were Young and Unafraid” with Cherry Jones. She’s very good. Just erase “What If” from her CV.