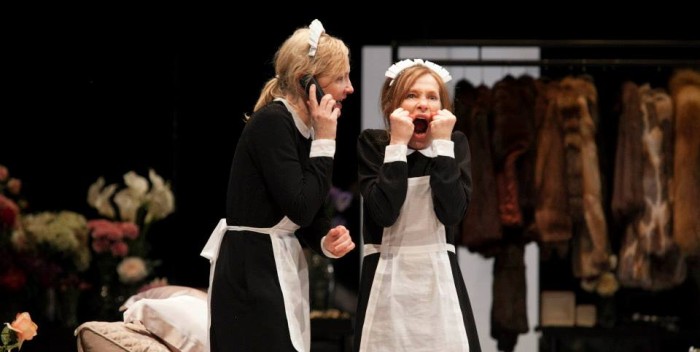 City Center Theater, West 55th St.: why is this block between Sixth and Seventh Avenues so crowded all of a sudden? I’ll tell you why: Cate Blanchett is starring in just 13 performances of Jean Genet’s The Maids, with French superstar Isabelle Huppert and “Great Gatsby” actress Elizabeth Debicki. This is the hot ticket in town if you can get it.

At Saturday’s matinee, Nicole Kidman was front and center with “Hedwig” creator John Cameron Mitchell. “Inside Llewyn Davis” star Oscar Isaac was sitting behind me. I saw composer Philip Glass in the foyer. Broadway producer Jean Doumanian (August: Osage County), was there, as well as famed casting director Amanda Mackey and “Get on Up” producer Victoria Pearman.

Meryl Streep has already seen “The Maids.” Every performance has been and will be like this. Crazy.

It’s not enough anyone more to say Cate Blanchett is “great.” She is, naturally, superb. “The Maids” is an existential comedy from the 1940s. Director Benedict Andrews, working from a new translation he and Andrew Upton (Blanchett’s husband, head of the Sydney Theater Company) created, has made Genet oh so modern and funny and accessible.

In the original play, two maids mercilessly mock their older mistress, a wealthy and silly woman who tortures her servants with all kinds of cruelty. Andrews and Upton turned this on its ear, making the maids a bit older than their young, petulant, beautiful mistress. The latter is now Paris Hilton writ large, a child woman. The maids, being older, have more to lose as they see their futures ebb away working for this monster.

If like me you’ve never seen Isabelle Huppert on stage– she is a treat. You wonder why she’s never been on stage in New York before this production. When I asked her after the show, she said she’d love to come back. Please, someone stage “Les Liaisons Dangereuses” for her immediately. Huppert’s French accent actually works to her advantage. But she is deft at comedy, a revelation.

Debicki, an up and comer, is perfect as this demented post-ingénue in a disco ball dress.

Of course, everyone is here to see our Best Actress, 2014, from “Blue Jasmine.” Blanchett doesn’t disappoint. Even Kidman, backstage, was awed and said so– simply the amount of text, long monologues, the actresses interacting with Andrews’ nine video cam operators, all of it. Blanchett is on fire all the time, for the whole no -intermission two hours. It’s hard to imagine how she can do two shows on a matinee day. Afterwards, all three actresses look like they need deep hydration!

If you can get in there, see “The Maids” before they clean up! There are only 8 more chances!