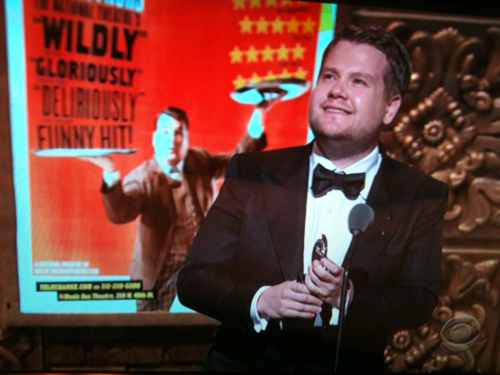 Tony winner James Corden has thrown a major monkey wrench into the planned spring Broadway revival of “A Funny Thing Happened on the Way to the Forum.” Corden was set to play Pseudolus in the musical comedy that last saw Nathan Lane in the main role. Nothing had been signed, but that was the understanding. Corden himself told me so in July at the “Begin Again” premiere in New York.

But now it looks certain that Corden is abandoning his theater career to host “Late Night” aka the Craig Ferguson show on CBS following what will be “The Late Show with Stephen Colbert.” What a shame. Corden is just brilliant on stage. But it’s money and security, isn’t it? The CBS gig will set him up for life.

So now what? “Forum” producers are set to announce a new star, a theater and an opening night. The news., I am told, will be imparted in the next two weeks. Corden’s news leak (a scoop for indefatigable Jeff Sneider over at The Wrap) definitely threw them off kilter. But I am assured many people have been met and looked at, and a new star is minutes away.

If you want to find out more about Corden, go see him “Begin Again,” currently in theaters. He steals every scene he’s in.