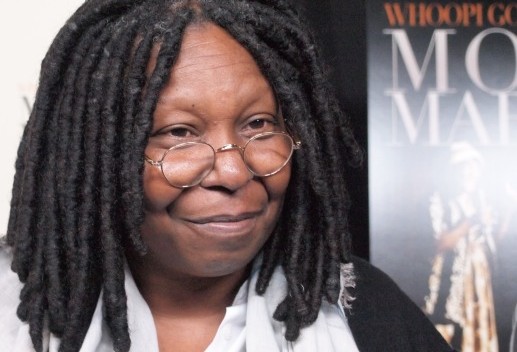 UPDATE: Whoopi Goldberg just called in to say two things. One– she’s happy with the way things are going, and that Julius Nasso is not the same person he was ten years ago. Second– The Christmas Pearl is a wonderful novel, and I should give her the benefit of the doubt. I agree, so I will. Let’s hope it turns out to be a surprise hit. I’ll eat my words!

EARLIER: Julius Nasso is sort of a “Get Shorty” figure with a curious past. He spent a year and a day in prison in 2004 for being an “associate” of the Gambino crime family although he denies strenuously any connection to the Mafia. He’s produced a string of really bad straight to video movie clunkers with a couple of freak exceptions like “Narc” with Ray Liotta in 2002.

On the imdb, he’s listed as executive producer of a 2014 movie called “Nailed,” directed by David O. Russell. Only, “Nailed” was a 2008 project that was never made, is completely dead, and was also supposed to be produced by David Bergstein, an, ahem, “controversial” Hollywood figure to be sure.

Now, somehow, he’s convinced Whoopi Goldberg to go into business with him. He’s also got David Belafonte, son of Harry. They’re about to start shooting what looks like another hopeless loser called “The Christmas Pearl,” co-starring Whoopi, the esteemed Broadway and TV star Judith Ivey, and Jasmine Guy of the 1990s TV show “A Different World.” The screenplay is from Anne Rapp, writer of two of Robert Altman’s lesser movies, “Cookie’s Fortune” and “Dr. T and the Women.” The director, Felix Alcala, is from series TV.

Movie financing is a rough game. Stars will do almost anything to get a movie made. Nasso’s resume proves that. In the last couple of years, he’s produced such gems as “Breakway” with Ethan Hawke and singer Selena Gomez and “Pride of Lions,” directed by 1970s shlockmeister Sidney Furie. (I can’t imagine what this is like, with a cast that includes Bo Svenson, Margot Kidder, and Louis Gossett Jr.)

Why Whoopi, an Oscar winner, is involved with this, is beyond me. The Christmas Pearl is already jewelry that will have to be brought back to the store for credit.

As for Julius Nasso, he’s a nice guy. In the decade since his scandal, he’s stayed out of trouble. I’ve met him. In September 2005, after he was sprung, Nasso gave a fondly recalled gala at his beach front compound on Staten Island. Nasso sent limos and buses to Manhattan to fetch the guests including curious journalists. I remember the tour I got of the house with Victoria Gotti. She was very impressed with his tromp l’oeil bathroom. He was thrilled.

As for The Christmas Pearl: it begins filming July 18th. Who knows? Maybe it will be out in time for Christmas.